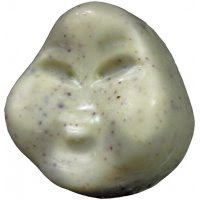 Despite having been steeped in mildly to moderate misogynistic comedy club culture for the past three years, a shred of my former feminist self remains. I was worried there for a minute, when I found myself completely relating to the headliner I worked with last weekend. When, three years ago, I would have found his observations predictable and even sad, a cause for him to reflect upon his relationship to women and perhaps even his relationship to his own sense of sexual shame, last weekend I was listening in the back like, “Yeah, I do know what you mean! Vaginas do look funny! Sometimes they do smell kinda bad! Heh heh heh. Clams! BUCKET of clams! Ha!”

I was worried. I was ashamed. Especially after I high-fived myself.

Apparently, though, there’s still an offended feminist within me, awakened by this little gem from the cosmetics company Lush. It’s the Sweet Japanese Girl cleanser. (Which my kick-ass friend, Josie Caro, alerted me to.)

It’s hard to even know where to begin. Sweet? Japanese? Girl? How sexist! How racist! How insensitive! Sure, some ignorant and disgusting people might like to rub their dirty bodies with a crude representation of a sweet Japanese girl, but what of those of us who are beyond that, who have actually thought about concepts like sexism and racism, who might like their soap to come in the shape of, say, a “Bewildered Indian” or an “Angry Polynesian” girl? I’d like to rub my body with an Angry Polynesian. Hell yeah. Where, I ask, is the soap for people like us?

Shit! Sorry! Damn it! I’m missing my own point, aren’t I? See, sometimes the lesbian part of me gets the better of the feminist part of me. It happens. These two women that reside within me—figuratively, of course—conflict, often over American Apparel ads. The feminist part of me will be shocked and outraged that any company would try to peddle its overpriced, shoddy cotton wear by slapping it haphazardly over the exposed crotch areas of droopy-lidded anemic teenagers, while the lesbian part of me thinks, well, it’s kinda hot. Then these two women that reside within me—figuratively, of course—confront each other with their points of view. They have to fight it out—figuratively, of course—while I then have to masturbate— figurative…actually, no. Quite literally. Whatever. Don’t judge me.

In any case, if you’re as offended as I am by Lush’s product, let them know! I’ve collected contact emails from their website for your convenience. Feel free to write your own letter or to copy and paste one of my sample letters.

The first email address, feedback@lush.com, is for “constructive feedback and suggestions.” They’re probably expecting stuff like, “Wow, ever since I started using Mask of Magnaminty, my pores are unnoticeable! In fact, my pores are so unnoticeable, the actual skin on my face has disappeared! Thanks, Lush, for solving the problem of me having skin and that skin having pores and those pores functioning! P.S. I’m down to a size 0, too, so it’s perfect!! I’m not sure I even exist.” Here’s the letter I’m sending to feedback:

I recently bought your Sweet Japanese Girl facial cleanser. I absolutely loved how the almonds exfoliated my face. I’ve used plain, roasted almonds as a skin cleanser in the past, but you guys were really smart to put them in a soap, it’s way easier!! Also I love how the tea tree oil detoxifies my face, just like your website says! Before that my face was totally toxic and I’d always get that dumb Britney Spears song stuck in my head and she’s so gross now ewww. Anyways, I have a small suggestion, tho. Maybe with the Sweet Japanese Girl Soap, in addition to putting in more almonds, which are totally awesome, you could also, like, be a socially conscious company and stop perpetuating racial stereotypes about Japanese girls being sweet! Just a thought! Thanks, Lush!!

The next email address is for “specific complaints or compliments,” meaning they won’t read it at all, which is obvious by the way they’ve named the account: rants@lush.com. Here goes:

I just bought your Sweet Japanese Girl soap and I love it but I did have a problem. I mean, I did it how you guys said, by warming the bar in my hands and rubbing it on my entire face. I removed it with warm water and I followed up with the Tea Tree water facial toner and everything. But I felt like, after using this soap, my skin, especially in the T-zone, was a bit greasier and more sexist and racist than it’s ever felt before. I used to use Fresh Farmacy and I didn’t have that problem. I mean, a soap shaped like a square probably works one way and one shaped like an exaggeratedly flat, chubby-cheeked, slanty-eyed, no-nosed ethnic “face” probably works a whole other way. Do you think it could be the shape of the soap that makes my skin feel filmy and prejudiced? Let me know! Thanks!

The next address, products@lush.com, is for product-specific questions. They say we should allow up to 72 hours for their reply and they thank us in advance for our patience. Translation: “Corrine, our e-mail intern, gets to this between fetching us Double Tall Soy Lattes and reading depilatory tips in the latest Cosmo. You’ll hear back from us when we feel like it.” This one was, by far, the most fun to write:

Hey Lush, I have a few questions about Sweet Japanese Girl (SJG). Were you guys being intentionally racist, misogynistic and sexist when you introduced SJG or was that just a coincidence? When between Baby Face and Angels on Bare Skin did you decide it was acceptable to make a grotesquely exaggerated portrayal of a Japanese face? Why does the face look as if it’s been bashed in with a frying pan? Or is it supposed to look as if it’s been bashed in with a wok? Why doesn’t SJG have a nose? Who writes the obviously fake customer reviews on your website? How can you pride yourself on being a “fun & funky” store (no doubt funkier by the use of an ampersand!) when you carry a product that so clearly offends Asians & pretty much any thinking human being? Is thinly vieled racism supposed to be “fun & funky ?” How did SJG pass not just one person, but a supposed TEAM of people, from design to packaging to marketing? Are you interested in having customers? Do you realize that there are over 128 million Japanese people in the world? What the fuck is wrong with you? And why didn’t you at least make SJG smell like Soba noodles? Thank you in advance to your answers to any or all of my questions.

Okay, guys, the last email address, support@lush.com, is a contact if you have “a technical issue with the web-site or forum.” They say they’ll “endeavor to get back to you within 24 hours to either provide a solution or indicate that we are working on this for you.” Here’s my letter:

I’m having a problem with your website. On the page http://usa.lush.com/cgi-bin/lushdb/234?expand=Skincare there’s a product called Sweet Japanese Girl. I’m wondering if this is a glitch, maybe something to do with Y2K? I’m from 2008, not 1908, and where I’m from, Japanese people aren’t exotic and sweet and cute and but rather just regular people. I’m wondering why this shows up on the website when there are no other comparable offensively stereotypical products, nothing like Hot-Tempered Mexican Girl or Oppressed Arab Girl or Ignorant American Girl. Is it possible that your server’s down? Whatever it is, I’d appreciate you working on it. Please get back to me to let me know what solution you can provide. Thanks!

So, guys, those are the letters I’ve sent. I’ll let you know if I hear anything back. If you decide to write to Lush or want to spout off, drop me a comment!