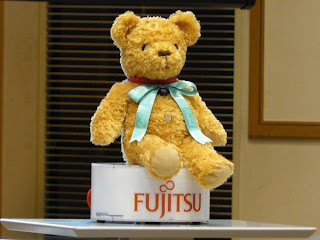 You know how you’re just living your life, running from one place to the next, eating canned mackerels over the sink or googling the exes of your exes (or whatever it is that you do), when you’re hit with information so incongruous with what you know to be good and right and logical in this world that you stop dead, dropping the canned mackerels or the obsessive/neurotic train of thought that inspires you to virtually check out and subsequently measure yourself and your sense of worth against the people in the past of the people in your past, and you say to yourself WTF? And you actually say, “W.T.F.,” not “What the fuck?” which shames the former English Literature major in you and makes you question whether or not you’re still living your real life or some abbreviated and flattened version of your life to be later uploaded on Facebook or condensed into a three-line text message and you at least take consolation in the fact that Facebook hasn’t yet come up with an eating-stuff-in-cans-over-the-sink application or a who’s-googling-people-it’s-actually-kind-of-creepy-they’re-even-thinking-about application because if it does, you’ll be all over that shit like a six-month growth of barnacles on the SS Timewaster? You know that feeling? Who’s with me?

I had that feeling recently when I saw Navirobo, a robot teddy bear designed to function as a navigation device. This plush, button-eyed manifestation of WTF is, let me say it again, a robot teddy bear, that from it’s place on your dashboard, uses its jointed arms and neck to gesture while providing spoken directions. It can point you toward your destination or point out a turn you just missed. Let us skip over, for the moment, how dangerously distracting it is to have a talking robot teddy bear flailing around on your dashboard, screeching commands and/or mockery at you (“You missed that left! Tee hee!”) while you’re trying to control a two-ton, moving hunk of machinery.

There’s more. Robo-teddy is equipped with sensors that detect reckless driving. If the driver suddenly slams on the brakes, Robo-teddy exclaims, “Watch out!” He also houses an alcohol detection sensor in his neck. If Robo-teddy gets a whiff of the ol’ funny juice, he passive-aggressively inquires, “You haven’t been drinking, have you?”

Who could possibly want this in their lives? I’m not a particularly hot-headed driver (calling people “sewage-filled, slimy-holed slotwads” when they fail to indicate a left turn in a timely manner is totally normal, right?) but I can easily imagine myself punching Robo-teddy square in his self-satisfied, made-in-China muzzle. Check it out, Ted. If I’ve slammed on the brakes of my automobile, I’ve successfully assessed and responded to a potential hazard. Case closed. I may even be a bit shaken up about it, depending on what near-disaster prompted me to slam on those brakes in the first place. (Did a toddler dash in front of the car? Did a tree branch snap off into the road? Was I over enthusiastically lip-synching and making up seated dance moves to “Bleeding Love?”) I certainly don’t need Can’t-Even-Reach-the-Pedals Ted over here to pipe up with a pious “Watch out!” You’re not helping, you’re just commentating, you no-license-having, fuzz-faced sack of smugness.

And how helpful is the alcohol detection? (Not to mention the fact that you have to pretty much make out with its neck in order for it to detect anything. Check out the video: http://www.engadget.com/2008/06/05/video-fujitsus-navirobot-smells-beer-tells-you-where-to-find/.) Call me a crazy, canned-mackerel-eating neurotic, but I doubt people who are prone to boozing and cruising are the same breed of folks who are going to install a teddy in their car. Perhaps I’m underestimating the purchasing power of the redneck, law-breaking teddy bear lover market.

“You haven’t been drinking, have you?” Assuming you’re not too drunk to follow that twistedly indirect question (“No, Robo-teddy, I haven’t not been not drinking at all!”), if you’re still planning on driving home, you’re suddenly put in the very surreal position of having to LIE TO A TEDDY BEAR. That’s the true indication of your alcohol problem right there. (Checklist: Do you drink more than four nights a week? Do you drink to “get ready” for social occasions? Has your drinking ever caused you to lie to a teddy bear?) And what’s Robo-teddy really going to do if you crank up the engine and start weaving your way home, giggle and try to sell you fabric softener?

I can’t tell you how disturbing I find the fact that this thing exists. All this time, I thought teddy bears were designed to provide quiet comfort to children as they bounced their way back and forth between Mommy’s house and Daddy’s under-furnished apartment that always smells like burnt hog dogs. I thought teddy bears were made to serve as collector’s items for sexless, middle-aged women from the American Mid-west who use “rouge” and are the sole reason manufacturers of pink sweatshirts with pictures of kittens on them are still in business. I had no idea teddy bears have been waiting to become robotized and slowly take control of our lives, one vehicle at a time.

It is my gladness to moreso Now introduce the kind and honest Rev Johnny Bradley!