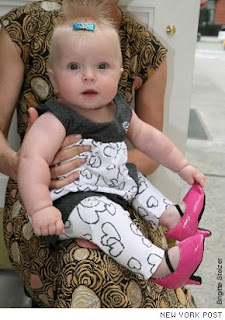 Heelarious, for those of you who haven’t heard, makes high heels for babies. No, you haven’t just ingested 3/4 of a “special” cookie1. You’ve actually read that correctly: high heels for babies. Or, as the website says, “her first high heels.” At least three of those words are so wrong they’re worthy of their own post-doctoral dissertation on sexism, gender inequality, and the misogynist fashion industry, but this is just a humble little blog. Plus, I can’t seem to settle on a title for such a dissertation. “‘Her First High Heels’: Why Passively Allowing Sarah Jessica Parker to Rise to Power Will be Modern Western Society’s Ultimate Downfall?” or “‘Her First High Heels’: Wow, How Dumb?”

Obviously, I’m biased. Let’s get another opinion. This is what Diane Sawyer, 62nd on Forbes’ “The World’s 100 Most Powerful Women” list, has to say about the high heels: “They’re squishy! They’re to dress your baby up when they’re going to fancy events, so they can have their own high heels.”

Ignoring, for a moment, the tragic fact that waking up in the wee hours to host “Good Morning America” has apparently left Diane Sawyer one sleep-deprived neuron away from communicating exclusively through exclamations and a simple series of handclaps (“Squishy! Baby dress up fancy! Clap, clap, clap!”), let’s take a closer look at her statement. Lest baby’s first high heels seem, at best, ridiculously frivolous, and at worst, dangerously objectifying, Diane Sawyer thinks they’re totally legit. You know, for when babies go to fancy events.

Okay, Diane Sawyer, I’ll bite. Let’s say, for some reason, a new mom has to go to a fancy event (and we’ll define “fancy event,” as something slightly more elaborate and dignified than discount day at the local grocery store). Let’s say, for some reason, this new mom has to bring her baby to said fancy event. Who knows, maybe the nanny got deported or the new mom couldn’t find a proper date and has a really poor sense of appropriate boundaries. Maybe, at this said fancy event, the new mom wants to parade around the bouncing, joyous reason why her nipples are leaking and she hasn’t slept more than four hours at a stretch in months. Okay, Diane Sawyer, I’ll play. The baby is attending her first fancy event.

It makes perfect sense then, Diane Sawyer, that the baby would need her own high heels. We all know how important it is for babies to feel like they have their own debilitating footwear, just like Mommy. It’s especially important when babies are at that tender age from 0 to 6 months, when they’re viciously eyeing everyone else’s belongings (provided the belonging is within 18 inches of their face, where they can actually focus on it), wondering why they don’t have their own, tinier, cuter versions of things. “Hey, wait a minute,” a 1-month-old baby may miraculously have the cognitive development to think. “How come that big lady over there, the one they keep calling ‘Mom,’ has those things on her feet and I don’t? Aren’t I a person, too? Don’t I have feelings? Wow, it’s like I’m not even at this fancy event! It’s like no one even respects me! In about two seconds, I’m going to start wailing and see how long it takes for them to figure out that I’m upset not because I’m tired or hungry or have a wet diaper but because I don’t have my own high heels. I want my own high heels! WAAAAAAAAH!”

Correct me if I’m wrong (and I’m not, so don’t), but aren’t the only real reasons for wearing high heels aesthetic? There’s nothing about high heels that doesn’t say “sexualized object.” (Not that there’s anything wrong with that.) It’s just a fact; I’m not even particularly anti-high heel. (Full disclosure: I feel about high heels the same way I feel about straight marriage and eating soft cheeses. I’m not against them in general, but I am against them for me. I mean, if someone out there wants to be in a straight marriage, wear high heels, and dig into Camembert, I respect their decisions. I don’t understand those decisions and I probably secretly judge those decisions, but I respect them.) Call me uptight (but I’m not, so don’t), but I don’t think there’s anything all that hilarious about dressing babies up in high heels. I guess some people– I’m looking at you, Diane Sawyer– would find a baby in high heels funny, so I’ll step outside myself for a moment and try to imagine what that would be like.

Ha, that baby’s in little high heels! That’s so funny! Ha! She’s wearing shoes specifically designed to make her legs look longer and slimmer! How comical! How zany! How incredibly wacky! That baby is wearing shoes that, if they were on an adult woman, would decrease her range of leg motion! Hysterical! Not since I saw the “I’m too sexy for my diaper” onesie have I been this amused! High heels on a baby! Ha ha! Oh my god, I’m laughing so hard my ribs hurt! My face aches! A baby in high heels! I can’t breathe! I just peed my pants! I’m about to pass out! Ha ha ha ha! Hee hee hee! Ha hee hoodly hoodle! Heh! Hah! Heah! Tee hee hee! A baby in high heels! Guffaw!

You might think I’m being too harsh on Heelarious (but I’m not, so don’t). What takes the concept completely over the top for me is that the shoes come in leopard print. What’s next? Baby’s first thong? Baby’s first frosted lipstick? Baby’s first chlamydia screening? Nothing good or pure or innocent comes in leopard print. Nothing. Try to think of even one thing (but don’t, because you can’t). Trust me, there’s not a more inherently slutty print in the whole of the animal kingdom. You see someone in zebra print? They’re saying, “Hey, I’ve spent some time in Africa and I’ve read Hemingway.” You see someone in tiger print? That says, “Watch out! I like to fancy myself a bit wild!” You see someone in leopard print? All that’s saying is, “Jello shots? Bring ’em the hell on! Don’t mind my cold sore!”

The website assures us that the products were designed with “safety and comfort as their main concern.” Hmm. I’d counter that “safety and comfort” couldn’t have been the “main concern.” I mean, I’m sure making money in a consumer-driven society was the main concern. High up on the list of concerns was probably marketing to egocentric, middle-to-upper class parents. Somewhere on the list of the concerns was making sure the product release coincided with the Sex and The City premiere. If “safety and comfort” (full disclosure: I love using people’s exact words against them) were the “main concern” (full disclosure: I am also a huge fan of quotation marks), the Heelarious website would feature babies in bare feet.

Wouldn’t that be “heelarious,” if someone recognized the ridiculous range of pointless baby accessories and told new parents it was okay to chill the heck out? If someone said, “Sure, yeah, now you’re parents. And guess what? You will be a little less cool and hip and trendy than you used to be, but that’s okay. After you’re done with the sleep deprivation, you can keep working on your personality. The (hilarious!) way you dress your baby won’t have to be your only form of self-expression.” That’s the website I would like to see. (Full disclosure: I suspect it’s out there, but I’m too lazy to search for it now. I have some waffles to eat.) Oh, and the other website I’d like to see is the one where Diane Sawyer sticks her bare feet into a tank of flesh-eating fish. (“Oooo! Tiny fish kisses! Clap, clap, clap!”) Luckily for me, that website is right here: http://jezebel.com/5027735/diane-sawyer-fearlessly-faces-flesh+eating-fish

1Actually, I don’t know, maybe you have just ingested 3/4 of a “special” cookie. In which case, I apologize for making assumptions about you and your ability to alter your mind while reading about the increasingly disturbing trend of baby clothes marketed to appeal to adults’ sense of humor or irony or ironic humor. (Oh, yeah, I’m sure your baby listens to the Ramones. You are both so hip. I’m very impressed.) Sorry, did that sarcastic parenthetical aside to hypothetical parents throw you off? Are you even following this anymore? Maybe you should go eat some waffles and be lazy; you can read this another time.

It is my Gladness: DeAnne Victory Winner