Friends, readers, strangers, and stalker (you know who you are, Rachel Templeton):

Thank you for your patience, friends, readers, strangers, and stalker. In exchange, I present you with a detailed account of my tour of Western Australia.

Well, mostly detailed. The thing is, I’m writing this from Montreal, sipping a limonade avec gingembre, where I sit in a cafe surrounded by sexy geeks staring at laptop screens, while accordian-heavy and increasingly disturbed French music plays in the background. The tour is a blur to me now. The ho- and motels I stayed in blend, in my memory, into one giant, beige carpeted room with grossly overpriced Toblerones on display, passive aggressive “We Care About the Earth! Do You?” signs in the bathroom, and a television continually playing the preview for “He’s Just Not That Into You.” I’ve decided to ascribe my hazy memory to the number of time zones I’ve crossed in the past few weeks and not, say, to potential lead poisoning I picked up in Port Pirie. 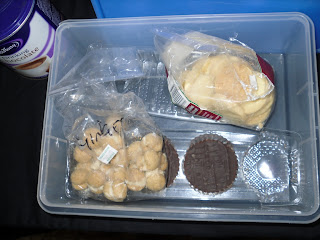 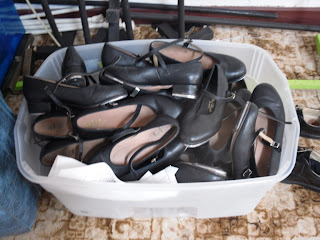 That’s right, a half-eaten package of hand-labeled “GINGER” cookies, and a box of tap shoes. Oh, Margaret River, you have a way with performers! How did you know that my ideal way to “get in the zone” before a show is to chow down on stale, suspiciously-packaged sweets and strap on my dancin’shoes? Tippity-tap, tippity-tap, mmm mmm mmm!

The coolest part about the show in Margaret River was that we performed to a sold-out house of just over 400 people. It’s not often that I get to be seen by 10% of the town I’m in. Or that .25% of that 10% would serve me breakfast the next day, simultaneously boosting and deflating my ego with the sentence, “I loved your stuff last night, but I’m not sure the crowd really got it.” Uh, thanks?

Next, we drove to Bunbury, a town charming in its directness. The Bunbury library is unmistakably that: 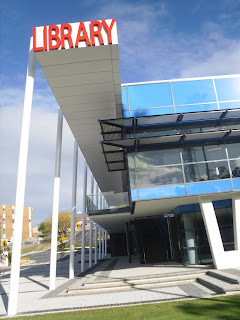 And the fact that the town has just one Thai restaurant is not only acknowledged, but celebrated: 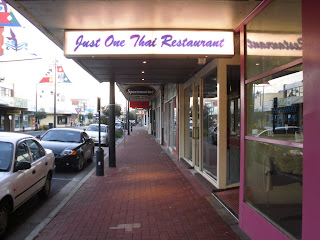 It’s the “Choose Respect” signs that, while straightforward at first, become perplexing: 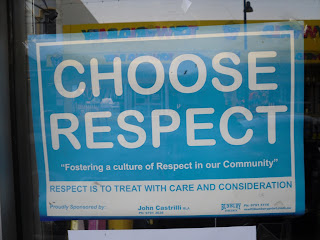 Sure, it’s fine message for a town to promote. What unsettles me, though, is that the town feels it needs to tell its inhabitants to respect each other, and then reminds them what respect means. “Respect is to treat with care and consideration.” I saw this sign on a doctor’s office, a place I’d assume where people were always treated with care and consideration. What was happening in Bunbury’s doctors’ offices to prompt this campaign?

“Listen, tubso, you got a blood-pump so choked with grease you’re gonna be dead by September if you don’t lay off the sausage rolls. Now, scram!”

“Yeah, yeah, babies cry, it’s what they do. Come back when that shit-machine’s blue or old enough to tell me what the god damn problem is. Now, scram!”

“Mysterious lump? I got two of ’em, lady, and I call ’em my ballsack. I got bigger fish to fry. Now, scram!”

Maybe that’s why the town’s most prominent sculpture is a giant, disapproving head: 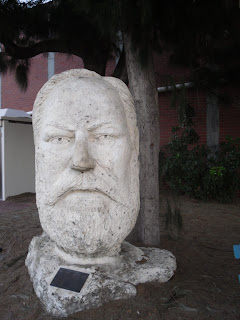 I’m not sure if Choosing Respect was what the woman who came up to me after the show and said, “You were great! I love your lesbian vagina…(insert uncomfortable, five second pause)…names” was doing or not. I will believe she was.

Only the second stop on the tour, Bunbury taught me a life lesson. Eating corn flakes out of a teacup with a tiny spoon in a ’70s-style motel room off the main highway while watching a movie starring that girl from “My Girl,” I realized that the touring life may not be all glitz and glamour. Thank you, Bunbury.

On to Geraldton! But first, this sign on the side of the road: 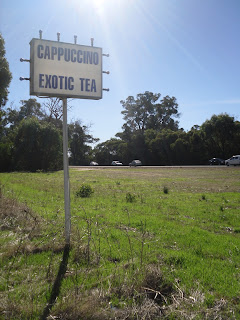 Did I say the touring life wasn’t all glitz and glamour? I take it back. I can’t imagine anything more glamorous than indulging in a cappuccino and/or exotic tea, as advertised on a light-up sign on the side of the road. Simple, elegant, understated, it is probably my favorite photo of the tour.

I have to admit, I loved Geraldton. While I was there, I breakfasted at Go Health Lunch Bar (named as if poorly translated from a non-Romance language, but nonetheless full of delicious treats), strolled art galleries, learned about the Batavia shipwreck at the museum, ate homemade ice cream, and didn’t get carried away by a rip tide at the beach (our stage manager was not so lucky). So enamored was I with the town and its unexplained ship-ka-bob 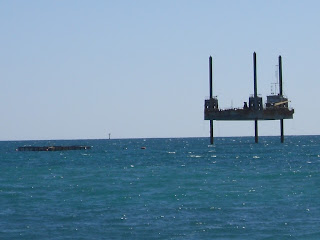 that the ominous Christian propaganda on the front of the Salvation Army store didn’t even phase me. 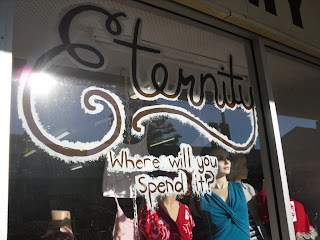 Where will I spend Eternity? I may just stay in Geraldton. Thanks for asking!

I might have been inclined to call Port Hedland a hot, salt-minin’ pit of despair if it weren’t for this: 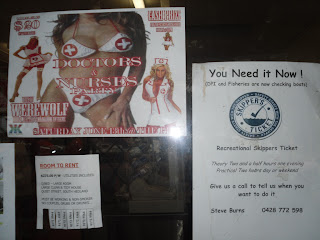 What you may not be able to see is the “No couples, grubs, or drunks” statement at the bottom of the room for rent ad in the left hand corner. Port Hedland, you’ve won me back! A town where you can get your freak on at a doctors and nurses party, get your recreational skippers ticket whenever you feel like it (“Give us a call and tell us when you want to do it”) and get a room for a mere $275 a week (provided you’re not in a relationship, on the sauce, or a beetle larva), is a town that’s all right by me!

On the drive to Karratha, we stopped at Whim Creek. We weren’t planning on it, but we were suddenly struck by a capricious and eccentric idea to do so. (See what I did there, vocab lovers?) Whim Creek, according to Whim Creek, is a must: 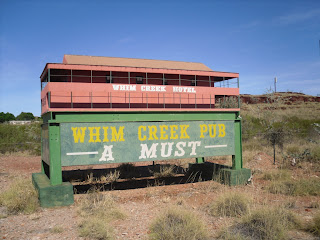 Remember that red dirt I was telling you about in Port Hedland? Well, it’s everywhere in Western Australia. So overtaken by the crimson dust, people can’t even be bothered to write “Wash me” in it. 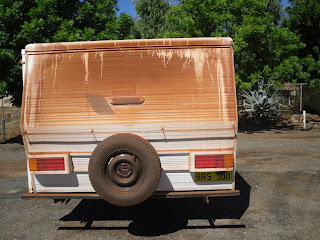 Because that wouldn’t be funny enough. What’s a hoot, though, is labeling handicap bathrooms like this: 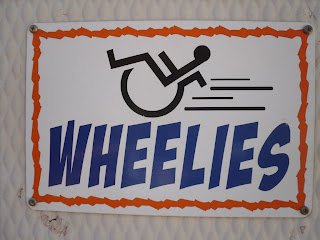 Wheelies! Leave it to blunt, fun-lovin’ Aussies to give their differently-abled brethren a nickname and some speed lines! This sign makes being in a wheelchair look so awesome, I almost wish I didn’t have full physical control of my lower limbs.

Despite full physical control of my lower limbs, I didn’t get out much in Karratha. As far as I could tell, the main highlights of the town were its shopping center and its ability to attract cyclones. When we asked the hotel receptionist what there was to do in town, she shrugged her shoulders and stared. I’ll remember Karratha for two things: the moist burp by which I was heckled, and the amount of dust in the theater’s green room. 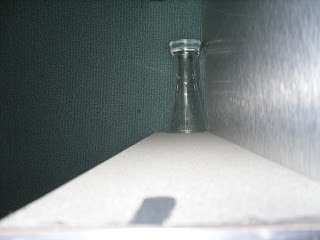 Next stop: Perth! We were in Perth for a week, which I mostly spent window shopping and taunting people with real jobs. My favorite past time in Perth became eating fancy lunches at places frequented by business people, and then staring at them with open mockery when they had to leave to return to work. “Nice life, suckers! I’ll be here eating salmon tartar and thumbing through the entertainment section of the paper while you sit in front of a computer screen in a fluorescently lit office cubicle, weakening your vision, but still clearly able to see your dreams wither and die.”

Most of Perth was hiding behind plastic construction fences, on its way to being built up or knocked down. In the midst of all the construction, I never one saw one person working. 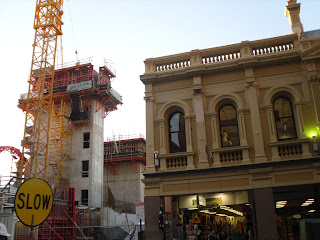 The best store in Perth has got to be this one: 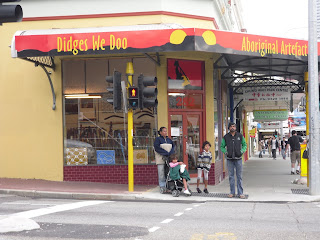 I know they have Aboriginal artefacts, but d’ya reckon they sell didgeridoos?

Esperance was our second-to-last stop on the Western Australia leg of the tour. It’s also the place where things tend to fall out of the sky, like wild birds poisoned by lead, and pieces of the Skylab space station. (“It’s a bird! It’s a plane! It’s…well, kind of both of those things. But much more foreboding.”)

We were there briefly, so my main memory is of the motel room. And what a motel room it was! It had three beds, and a bathroom bigger than my Montreal apartment. The bathroom actually had two chairs in it, should one get winded walking from one end to the other and need to rest. I hadn’t felt lonely on the entire tour until, in this Esperance motel room, I realized I could have had four other people and a rugby team in need of a shower traveling with me. And there I was, small, alone, cold, sleeping in a scarf and beanie.

In an effort to warm up and alleviate my loneliness, I thought about maybe guttin’ and cleanin’ some fish. Luckily, I saw this sign posted near the door: 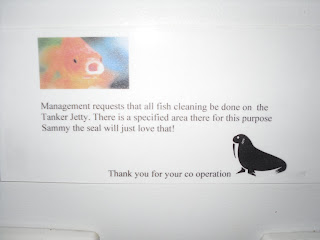 Ah well. No fish foolery for me.

On the drive to Kalgoorlie, we passed Norseman 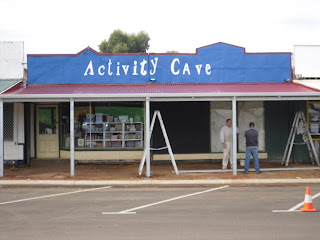 and its cave of activity. Activities include erecting ladders, smoking, and scaring children.

Then, there was what looked like the worst-ever place to picnic, in Widgiemooltha: 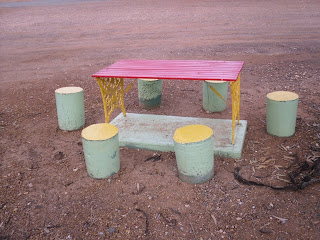 First of all, yes, Widgiemooltha is the real name of a real place. It’s no Salmon Gums or Mount Remarkable, but I like it.

Secondly, I may not be great with spatial relativity (any of the bruises I’ve incurred by simply trying to move from one room to another in my apartment could serve as proof), but it looks to me as though the festive yellow concrete stumps surrounding the table would not allow one seated on them to actually reach the table. “I’ll just scootch this forwa…oh, nevermind. Pass the cole slaw?”

Kalgoorlie is amazing. It’s a historic mining town, and home of the Super Pit, an open-cut gold mine about four kilometers long, one and a half kilometers wide and 500 metres deep. Standing at the edge of the pit, listening to the faraway rumble of gigantic trucks below, I was so mesmerized, it was easy to forget I was witnessing complete environmental degradation. But hey, if it’s gonna look so cool! I would pay almost any price for gold now, after seeing the sheer amount of drudgery and toil it takes to get that stuff out of the earth.

I could post a picture of the Super Pit. Or I could tell you how the mine will be used up by 2017. (Sidenote: if you’re ever performing in Kalgoorlie, don’t mention it to the people in the crowd, all of whom are somehow financially dependent on the mine, ’cause they’re a bit touchy about it.) Or I could describe the mechanized toilet stall in the middle of town that played an instrumental version of “What the World Needs Now is Love” but I won’t do any of those things. I will leave you with this: 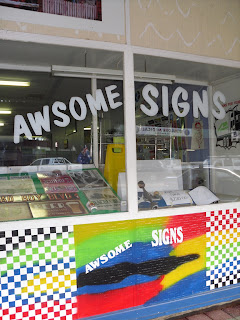 There you have it, friends, readers, strangers, and stalker! That’s my experience of Western Australia. I know it may have been a lot to get through, so here’s handy reference, likening each city the tour played in to the Australian celebrity it most resembles.

Port Hedland = AC/DC.
Way too heavy and one-note at first, but won me over with its unrelenting commitment to being itself.

Karratha = Natalie Bassingthwaighte
Not bad, but essentially, there’s nothing there.

Perth = Nicole Kidman.
Nice to look at, but under constant construction.

Esperance = Air Supply.
Made me feel cold, lonely, and as though I should skin fish.

Punky Brewster or, Refrigerators Can Kill You!