Punky Brewster or, Refrigerators Can Kill You!

DISCLAIMER: I will, in this blog about Soleil Moon Frye, known best for her portrayal of TV’s young and plucky Punky Brewster, refrain from mentioning gigantomastia (extreme growth of the breasts). If, my friends, you’re looking for cheap jokes about gigantomastia (bilateral benign progressive breast enlargement), look elsewhere. If you’d like to see images of gigantomastia (I recommend it), you have come to the wrong blog. Even if you’d simply like a medical definition of gigantomastia (seriously, it’s like EXTREME growth), this blog will be naught but a disappointment to you. While easily exploited for both humor and shock value, gigantomastia (the largest recorded weight per breast was 67 lbs!) will not be mentioned even once in this blog. If gigantomastia (Google it) is what you’re after, I suggest you move along. Thank you.

Soleil Moon Frye ranks up there with Nancy Reagan and Garbage Pail Kids as oddities from the ’80s I have not thought of in a very, very long time. She came back into my life and consciousness much the same way the depressing theatrical works of Sarah Kane or the benefits of omega-rich flax seed oil or use of the word “perv” as a verb (“I was totally perving on that girl”) came into my life: thanks to my girlfriend.

My girlfriend, who hereafter will be referred to as HoneyButterMelt,* has recently developed a weakness for celebrity Twittering. (Is that even the correct way to say that? Celebrity tweeting? Celebritweet? Mind-numbingly boring psuedo-newsfeeds?) In any case, it was a short-lived hobby of HoneyButterMelt’s, but a relatively intense one. In the time she was into it, HoneyButterMelt learned everything there is to know about Lindsay Lohan and Samantha Ronson (either a lot more or a lot less than you would imagine, depending on whether you have your own life), which led to her Nicole Richie’s page, which led her to Sara Gilbert’s page, which led her to Soleil Moon Frye. (Really, I’m not going to mention gigantomastia, so quit waiting for it.)

Soleil Moon Frye, it turns out, has gone from this: 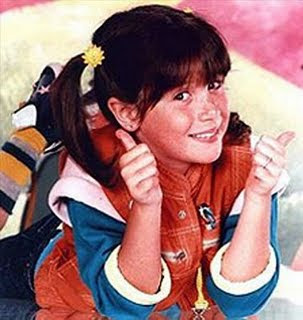 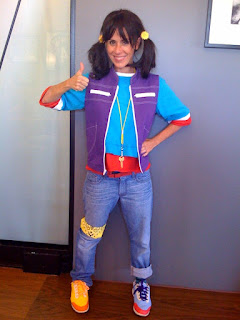 Horrifying, isn’t it? But not nearly as horrifying as the video I will link you to at the end of this blog (and no, it’s not a video about gigantomastia).

Apparently, the only thing of consequence Soleil Moon Frye has really done in her life is portray TV’s young and plucky Punky Brewster. Punky Brewster was great, but unless I’m drunk on tequila in a seedy strip club in Chicago, I really do not want to see a 33-year-old woman dressed up as her, flashing me a thumbs up. Excuse me while I shudder.

I got to thinking about the show, and I’m disturbed by how many details I remember. The main set up, as I recall, was that Punky Brewster (having been left in a shopping center by her mom) was a resourceful and courageous orphan who, along with her faithful dog Brandon, befriended Henry and taught the old codger to love again. I credit the show Punky Brewster with teaching me three important lessons I’ve carried in my heart throughout my life. 1. Quick wit and determination can get a girl out of a jam. 2. Friendship is the most valuable thing in life. and 3. MY MOM COULD ABANDON ME IN A SHOPPING CENTER.

Way to shatter my innocence, Punky Brewster. That little backstory detail, mentioned perhaps once in the first episode, stuck with me like the bittersweet memory of Samantha Ronson’s loving touch sticks with Lindsay Lohan (which is to say, deeply). If Punky Brewster’s mom could leave her in a store, my mom could leave me in a store. Why the heck wouldn’t she? I was cute, sure, but not nearly as freckled or adorable or full of pep as Punky Brewster. Compared to the awesome Punky Brewster, I was totally expendable. Thanks to that show, my mom never had to tell me twice that we were leaving a store. I would be up and away from the Cabbage Patch doll display faster than Samantha Ronson can delete Lindsay Lohan’s increasingly desperate tweet-attempts to win back her heart (which is to say, as hastily as possible).

A friend, who hereafter will be referred to as Diane Smithers**, suggested that as far as backstories go, the whole mom-leaving-you-in-a-shopping-center thing wasn’t a horrible one. Diane Smithers said that the show’s writers probably thought it was better than other possible explanations for why a kid would be orphaned. Imagine the brainstorming session: “How about Punky’s mom is a crystal meth addict? Maybe her parents died in a fire? Her dad killed her mom and is now in jail? What if Punky’s Chinese and her country has a one-child policy and seeing that her culture traditionally values sons over daughters, her parents felt the social pressure to produce a boy and abandoned her on a rocky hillside?” “…Or, maybe, her mom just left her in a shopping center?” “Yeah, that’s good.”

The other notable thing about Punky Brewster was that all the episodes had a message. Does anyone remember when the kids were playing hide-and-seek outside and one of them decided to hop into an abandoned refrigerator? Holy Macanole, that kid almost died! Inside a refrigerator! Unlike Lindsay Lohan getting the message when Samantha Ronson does not reply to her exclamation-point-heavy tweets (which is to say, not at all), I got the refrigerators-are-death-traps message loud and clear. Thereafter I eyed our refrigerator at home knowingly, with suspicion and contempt. You won’t kill me, chilled place where we keep our produce!

Remember the episode where the illiterate girl who lied about being able to read had to face her ignorance when her little brother drank some cleaning solution and she couldn’t read the poison control instructions on the back of the bottle? Or when all the picked-on kids ganged up against the school bully, Moose? I’m telling you, Punky always had a message. “Refrigerators will kill you. Punky Power!” “Don’t lie about if you can read. Punky Power!” “Try not to drink stuff under the sink. Punky Power!” “Don’t be a jerk to other kids. Punky Power!”

I’m tempted to go on, both about Punky Brewster (really, the amount of trivia I’ve retained about that show is troubling; I could write a thesis on the bleak theme song alone***) and the sad and shattered lovelorn LiLo, but I’ll get to Soleil Moon Frye’s video (which is definitely not about gigantomastia). Be warned, it is extremely disturbing. But be heartened, it is also extremely affirming. It will probably make you feel really, really good about the choices you’ve made in your life, seeing as those choices– whatever they were– did not lead you to make the following video. Enjoy. HoneyButterMelt, this video is for you.

*Not her real name, but a psuedonym designed to protect Sarah’s anonymity.

**Not her real name, but a psuedonym designed to protect my ego and reputation from the fact that the “friend” I was talking to was me.

***”Maybe the world is blind (do do do do do do), or just a little unkind, Don’t know…Seems you can’t be sure (do do do do do do), of anything anymore…Oh no…” Those are the opening lines to a kids’ show!
Well, they can’t say they didn’t prep us for a world in which moms shuck off their kids in shopping centers and refrigerators stalk and murder 8-year-olds.

America’s Next Top Model: Only Slightly Better Than Chewing Glass