Let me dive right into it. I know you’re all wondering what became of Pab “Poontang is the shit” lo.

So, Pablo. Sam did indeed bring him on stage, where he was allowed to utter four words only. I’m sure you can imagine what those words were. The folks seated in the Cairns Civic Centre paying upwards of $30 a ticket didn’t find the exchange quite as hilarious as we did the night before, but Pablo did indeed have his moment to shine.

Today, a bunch of us piled in the ride and headed off to Palm Cove, a swank little beach town about 25 minutes from downtown Cairns. It was on the way to Palm Cove, when I found myself worrying about whether or not I had enough sunscreen and/or whether or not there would be sufficient shade and/or whether or not I could refill my water bottle and/or whether or not I would want an extra towel so that I’d have one to dry off on and one to lay on the beach with, that I had to admit to myself that I am not, by nature, a laid-back, beach-going type of person. No one has ever accused me of being “easy-going.” I’ve never been leaning back, smoking a joint, listening to The Steve Miller Band and going, “Yeah. I relate to that shit.” I don’t even own a pair of sunglasses. When it’s sunny, what I do is, I take off my regular glasses, and then I squint and occasionally complain.

I’d love to be the gal that just slaps on a tank top and flip-flops down to the shore, body board balancing atop tan and muscular shoulder. But that is not who I am. I only wear tank tops indoors, flip-flops hurt my sensitive widdle toes, I’ve never body boarded and my shoulders are pale and pokey, like anemic triangles or Kristen Stewart’s ears. Years ago, I would have felt like admitting all this was limiting. Today, I feel like it’s liberating.

So, here we go: I like the beach, but I am not good at it. I do not enjoy being hot. I do not enjoy getting sunburn. I do not enjoy the feeling of sand in my orifices. What I do enjoy is reading in the shade, and that’s what I do at the beach. I could put an ocean sounds CD on in a library and have pretty much the same day.

Palm Cove, though, is lovely. In fact, as this sign attests, it’s the cleanest beach in Australia: 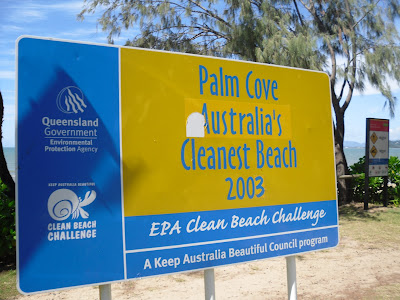 Or was, seven years ago in 2003. Here’s another sign, graphically detailing the dangers of beach-going in Australia: 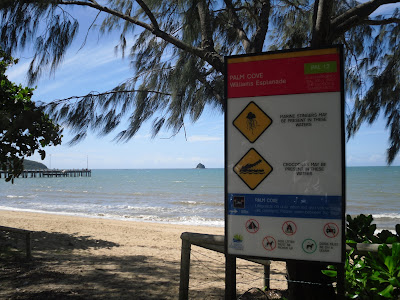 Oh, and just in case you aren’t quite clear on what’s happening, here’s today’s stinger risk: 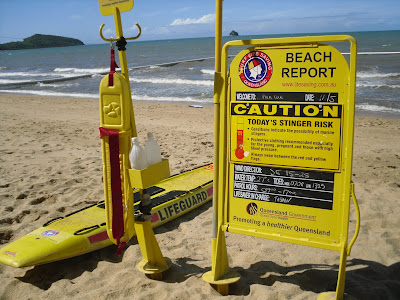 Moderate. Not negligible, but not outrageous. You know, moderate. Average. Today’s stinger risk is moderate. It’s adequate. It’s fair. There is a fair chance you will get stung by a marine creature. Today. In these waters. It is a risk, moderately.

I’d never heard the term “stinger risk” before, and I like it. I’d like to chop the apostrophe s off that sign, so it would read like a rock club marquee. Today: STINGER RISK. “Stinger Risk? No way! The way they play the nematocysts is so wicked, man.”

Oh, and speaking of Wicked, check out this Wicked Camper Van I spotted today: 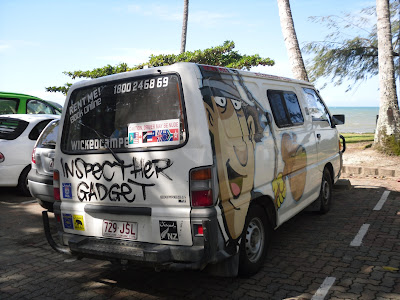 Inspect Her Gadget! Get it? It’s like Inspector Gadget, but kinda sexist. I wonder what other nostalgic cartoon characters they tried to turn into perverts before settling on that one. Flasher Gordon? Scoob her doo? Monchichis? (Obviously, the Monchichis do not need to be altered to sound dirty, combining as they do the sound of both “munch” and “chichis.”)

While at the beach, I also saw the whitest two people I have ever seen anywhere. 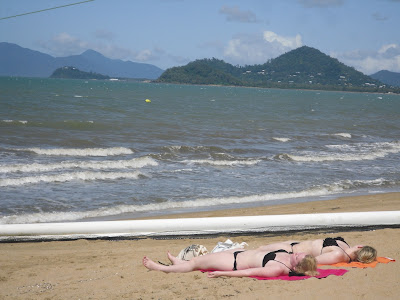 Of course, I had to pretend to be capturing the picturesque surrounds in order to snap that photo for you. Here I am, claiming mild outrage at Inspect Her Gadget while meanwhile, I’m clickety-clacking away at girls in bikinis on the beach. Well, just another day in the life of bloggin’ for DeAnne Smith.

And I’ll leave you with a photo of this little guy, who we met on the way to Palm Cove. This is exactly who I want to be if I’m ever reincarnated: the happiest dog in the world. 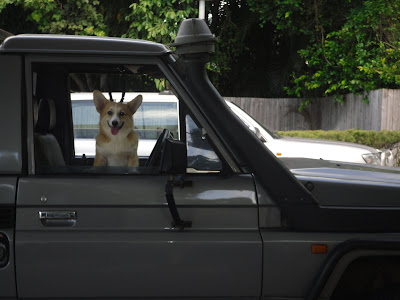 Day One, Cairns: "Poontang is the Shit"