Okay, Blog-readers. I’m not gonna lie to you. I’m pretty much phonin’ this installment in, as I’ve gotta be up early for snorkeling tomorrow. That’s right. Snorkeling! At the Great Barrier Reef! With sea turtles! And dugongs! And starfish! And a sick realization that unless humans can hurry up and get it together, pollution and overfishing are going to ruin all the natural beauty we have left!

Before I head off to dream of clear blue ocean water and a 6-billion-strong, human hand-holding chain set to a backdrop of Peter Cetera’s “Glory of Love”*, I will quickly fill you in on today. Today was great.

Cairns, you’ve shown me what you’ve got, and you’ve got a lot.** You’ve got this weird shade structure in the middle of the Central Business District. 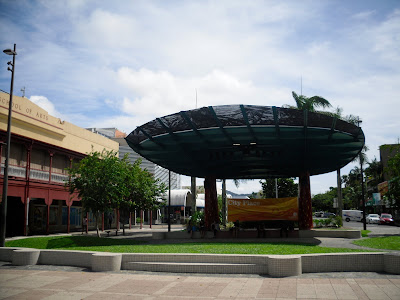 You’ve got this Indian restaurant pleading desperately for business. 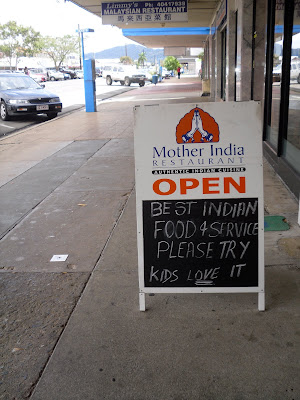 And you’ve got THE MOST UKES I HAVE EVER SEEN IN ONE PLACE!! 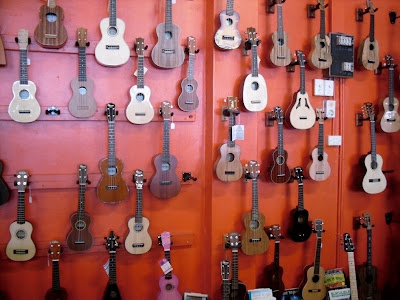 And then the day just gets better. I head on to lunch at Spoons (46 Aplin St., Cairns, QLD 4870, Australia (07) 4031 1110) and chow down on what to my seagan (a mostly vegan who eats fish), gluten-free, generally sensitive little guts is sheer heaven. This homemade sandwich, stuffed full of goodness: 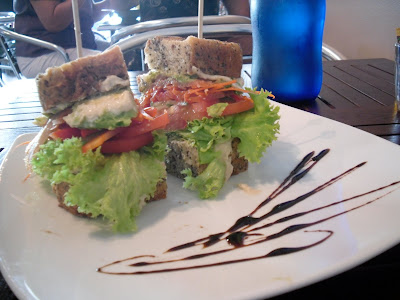 Yes, I took a picture of my sandwich. Yes, I was dining alone in a cafe. Yes, the people at the table looked at me strangely. Yes, I felt foolish. But what those people don’t know is that I am FAMOUS ON THE INTERNET and that MILLIONS OF PEOPLE have since viewed this sandwich, and that those MILLIONS OF PEOPLE have felt– through the sandwich-viewing experience– both closer to me, and closer to the common joys that bind us all together as humans on this wonderful and delicate planet. Cue Peter Cetera:

Tonight it’s very clear,
As we’re both lying here,
There are so many things I waaaaaanna say.
I will always love you,
I will never leave you alooooooooooooone….

What else made today so great? Lunch on lunch, that’s what. I went from the cafe directly home to a Comedy BBQ. (It’s like a regular BBQ, but with more comedians and, subsequently, more thrown foodstuffs.) This is what I ate: 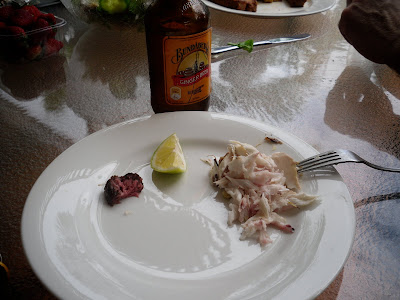 What’s that you spy on my plate there? What’s this sensitive little gluten-free seagan eating for second lunch? Could it be a piece of ‘roo? A bit o’ the ol’ ‘roo? A little ‘roo niblet? It is indeed! I ATE KANGAROO MEAT TODAY! If I had more time, I might reflect on the physical, mental and emotional impact of tasting red meat for the first time in over 15 years, or the complex thought process I used to justify my decision (it has a lot to do with kangaroo being sustainably farmed) but instead, I will simply say: it was pretty delicious. Granted, I ate about a quarter of the little piece you see on my plate, and threw the rest at Sam Simmons, who caught it in his mouth on the first try. A real champ, that Sam.

Next, it was on to the Esplanade, Cairns’s waterfront walkway. On the way, I passed this classic, Cairns-style bearded tree: 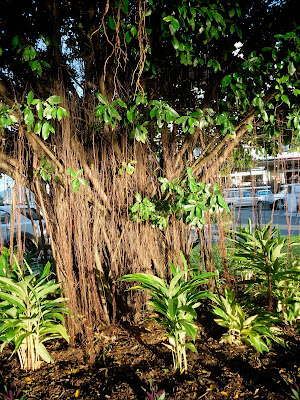 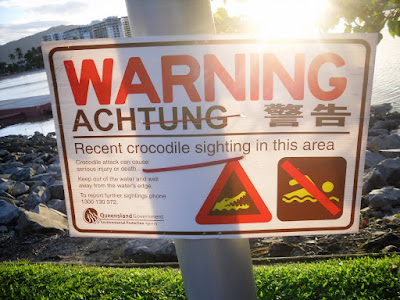 Because it just wouldn’t be a day in fa’ no’th Queensland without an imminent attack warning. I like how they’ve set up the pictures so that the croc looks like it’s chasing the swimmer, whose mortal extinction is represented by the red line through his body. I also like that they’ve given the croc just enough detail to have a truly menancing-looking evil eye. Achtung.

Lastly, I’ll leave you with this shot: 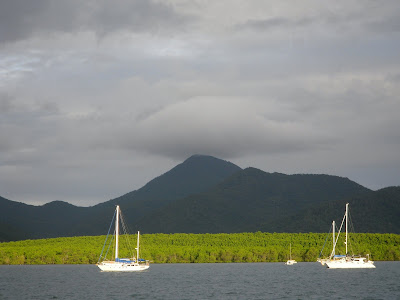 And this thought: Why don’t I have a boat? Sure, my life is relatively charmed, what with getting to live my personal dream and all, but seriously, where is my boat? I deserve a boat. People have boats. I’m a person. I want a boat. So, it’s settled. I’m getting a boat, and on that boat, I’m gonna play one of my many new ukes and eat roo and save the environment from human destruction, all the while listening to Peter Cetera’s “Glory of Love.” Yeah. That’s exactly what I’m going to do. Cairns, thanks for giving me something to strive for.

**This is a slight exaggeration. If ever you are in Cairns, expect to see lots of tourists, lots of tourist-related things (hostels, falafel joints, marijuana t-shirts), and an unusual number of bats.