Let’s start with the massage. As I type this, I’ve got four hot eucalyptus patches burning holes into my shoulders and lower back, working their secret, ancient magic. It feels good, I think. I just hope I don’t lose too much skin tomorrow morning when these puppies come off.

After performing in front of a sold-out crowd at the Civic Centre, post-gig night massage (at Cairns’s famous Night Markets) was a level of rock star* luxury I couldn’t pass up. As was purchasing the burning eucalyptus patches. When my day started, I never could have anticipated that it would end with a young South Korean man digging his elbows into my buttocks, but I suppose life is full of surprises.

I enjoy massage, I think. To be honest, I can never just fully relax and get into it, as at least 35% of my attention is reserved for observing and commenting on the experience. During a massage, my inner monologue goes a little something like: “Oh, okay. This is how it starts. Right. That’s a lot harder than I thought he would– oh, that tickles. I didn’t know I was ticklish there. How can it kind of hurt and tickle at the same time? Is that good? Is that helping or making it worse? And now…okay…that was a crack. He’s cracking my back now. Right. Okay. And now, he’s moving further down. Interesting. Are those his elbows? Is he using his elbows? That feels like elbows. Those are definitely elbows. Jesus, how far in is he gonna go with– oh, okay. Just to there. Yeah, I guess that’s fine. Massage. This is a massage. I am getting a massage right now.”

The other thing that happens when I get a massage is, I fall a little bit in love. I’m sure it’s just the intimate nature of human touch triggering certain pleasure centers in my brain. At least, that’s what I’d like to think and not just that I am overly emotional and perhaps starved for affection. When this young man massaged my hands, part of me was thinking, “That feels very nice. I love this. Well, I guess I have a boyfriend now. I hope we’re always together, just like this, and our relationship never ends. I love him. He’s my boyfriend.”

I have to say, that massage was sweet reef. Sweet reef, if you don’t already know**, is the cool new way to say that something is fantastic. Let’s say you don’t go to the falafel place I went to for dinner tonight, where the guy is mean and has no front teeth and threatens not to serve you if you don’t want the wrap and only want the falafel on a plate and then, only after your male comedian friends step up and get involved, he finally relents and serves you falafel on a plate but puts so many raw onions on the plate (a truly ridiculous heap of raw onions) that you’re certain this is his subtle way of continuing to be an asshole about the fact that you don’t want a wrap as if your inability to digest wheat products is somehow a personal affront to him and his entire falafel business, and instead of doing what I did, you go somewhere else and have a delicious falafel. You might say of that delicious falafel, “Dude, that falafel was sweet reef.” Meaning, of course, that it was one delicious falafel, and that its falafelness was as falafelly as it could possibly get. Sweet reef.

I came up with this little slice of slang (which I do truly hope will catch on, and spread) while snorkeling at the Great Barrier Reef today. Now, THAT was sweet reef. I feel like I don’t have the brain power at the moment to try to assemble the most precisely evocative words with the proper amount of poetry to communicate what a truly unique, beautiful, and awesome experience it was. Instead, I’ll chuck some words at you and let you fill in the gaps: amazing, trippy, slightly terrifying, parrot fish, finding Nemo, colorful, sticky intestines, floating, mild panic, wave-slapped, spit, sunblock, giant clam.

I do feel changed by the experience, but that might just be because MY FOREHEAD IS DENTED FROM WHERE THE SNORKELING MASK WAS. Still. Like, visibly and tangibly dented. It’s been nearly twelve hours since I’ve taken off the snorkel mask, and yet my forehead is not only dented, but sports a horizontal red line. Snorkeling at the Great Barrier Reef was a great experience, but I’m less and less sure it was worth permanent facial damage.

Or maybe it was. It’s not everyday one is on a boat before 8 a.m., being enthusiastically yelled at by abnormally cheerful young folk, while they shove used and moist apparel in one’s face. “Good mornin’! How you goin’ today! You ready to get out there and see the reef!” I replied as I thought we were meant to (and really, as the energy of the situation warranted) with a big ol’ “WOOOOOOOOOOOOO!” I was the only one who attempted to match the skippers’ joie de vivre, though. The other 30 or so people on the boat just eyed me sleepy-eyed and suspiciously.

As did this gentleman, as I tried (and I suspect failed) to covertly take his picture. 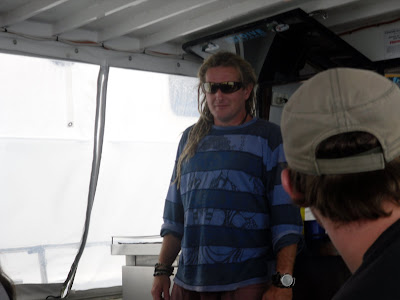 He’s not one of the young, chipper chaps and gals in board shorts and polo shirts, but he’s still representative in his own way of the type of people this sort of business attracts. This was the guy trying to rent us underwater cameras for the day. Note the blond dreads. Note the beaded bracelets. Note the weathered skin and general resignation trying to pass as relaxation that maybe life didn’t turn out quite like he thought it was going to. Dude, whatever. I’m gonna slap on some sunglasses and just be with the fish, man. Be with the freakin’ fish.

You might think, it being fa’ no’th Queensland and all, that we’d be given a quick lesson about or at least a placard indicating all the dangerous creatures we might encounter while floating alone in the depths of the ocean, and the various injuries those dangerous creatures could inflict. Nope. What we got was this form to sign. 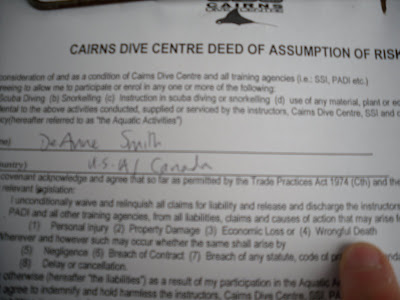 The lecture we did get was about swimming. “Captain Klaus,” a prematurely wrinkled man of about 45, took us snorkelers up to the deck, and asked those of us that could swim to raise our hands. “Hmm, I see,” he said, surveying us while he paced back and forth. “You can swim.” And that’s when his voice changed. “You know what? THAT’S THE BIGGEST LIE I’LL HEAR ALL DAY!” He snorted. “You can swim. Where can you swim, in a pool?” he asked derisively. “Well, this isn’t a god damn pool! This is the ocean! The ocean! The ocean doesn’t care if you can do some pansy-ass doggie paddle in a pool. That won’t cut it in the ocean. You better change your attitude RIGHT NOW! I’m looking at all of you, and all I see are liabilities. I consider you all liabilities. You can swim? Please.”

Captain Klaus was quite a change from the chipper kids, but I appreciated the contempt in which he seemed to hold us, his paying customers. He then went on to ask us each where we were from, seemingly interested in small talk, but only reeling us in for further humiliation.

“Where are you from?” he asked me.
“Oh, the U.S.,” I said.
“And where in the U.S?”
“New York.”
“New York…” he paused, and for a moment I thought he was going to say something like, “Oh, I spent some time there,” or “That’s a nice place.” Instead he barked, “That’s pretty far from the ocean!” I am not exaggerating when I tell you he had the same exchange with each of us, individually. “Where are you from? Where in England? Manchester? That’s pretty far from the ocean!”

And fair enough. The ocean was pretty choppy today, and we were getting tossed around like cliched sexist jokes at a taping of Two and a Half Men. Which is to say, a fair bit. I did have one small moment of panic (fine, among quite a few small moments of panic) when I was headed back to the boat for lunch, having been the last one left out on the seas. After drifting quite far away, lost in my own wondrous underwater world, I started swimming toward the boat and realized a little too late that I might not have left myself enough mental and physical strength to battle the waves. I briefly considered calling for a life ring, but decided no, I’m not that weak. If I have to, I will just sink and die right here near the Great Barrier Reef. It’s been a good day, and I’ve seen some amazing sights, and if I can’t make it back to the boat, well, I’m at one with Nature now. I get it. Natural selection. Take me if you have to, Nature. You win this round.

Obviously, I did find the inner strength to flipper my way back to the boat. The question now is, do I have the inner strength to keep writing about today? And, you know, I don’t think I do. I’m massaged and patched-up and forehead-dented and happy and exhausted. So I’ll leave you here. May your tomorrow be sweet reef.

*If “rock star” luxury means it costs $15 and happens in what’s really a glorifed strip mall.

**i.e., if you’re not one of the 3 other people that went snorkeling with me today.