First off, the main thing you need to know about Townsville is that there ain’t much happening in Townsville. Word on the street is that the best things to do are check out us, or some dude named Luke Pickler, who seems both saddened and mystified by the fact that he has two heads. 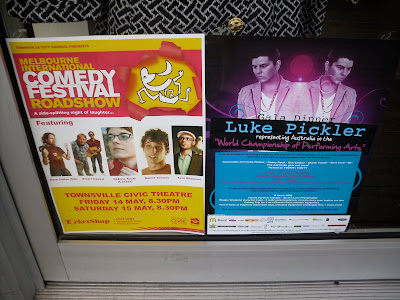 The other thing going down in the Towns (as I affectionately refer to it) is some incredibly bad cafe art. I snapped these pics for you, mustering all my acting strength as I pretended to admire them. 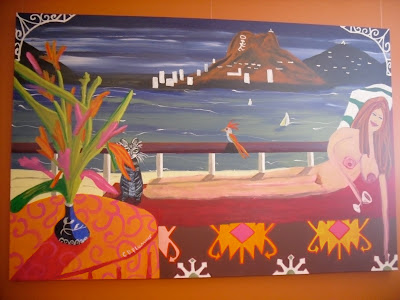 “That’s not so bad,” you may be saying to yourself. “Why do you have to be so judgmental? Clearly, the artist has developed his or her own personal style. Rustic, yes, but who says women’s arms need to be of natural length or that their proportionally enormous breasts should inhabit the same spacial plane or flop in a manner that respects the known laws of physics? Who says women need to have noses, for that matter? It’s a painting, DeAnne! A representation! So what if the subject holds a wine glass directly under one of her nipples so that it appears as if the monstrous nipple is draining liquid into the glass? That’s an artist’s prerogative! Why shouldn’t there be a somewhat detailed and realistic-looking cat standing to the left of a bird so crudely smudged onto the canvas that the background ocean is visible through his body? It’s art, man! And if the evil-looking cat has more facial expression than the woman, all the better! It’s probably some kind of statement! As if there’s some painting rule book that claims that a representation of Castle Hill should not loom large and distractingly in the background, dotted with indistinguishable white blocks and what appears to be a cave-style drawing of a freakishly gigantic person ascending the hill! You’re not the Judge of Art, DeAnne Smith! Why don’t you stick to what you know? Yeah, go back to your occasionally insightful and quite often surprisingly dirty jokes, you joke-teller! That right there is a good painting and I like it! I like its colors and its abnormal and irregular shadowing pattern, so you know what? Go screw yourself!”

Okay. Geez. No need to get aggressive. Fair enough. But would you feel the same way about that painting if I showed you this one? 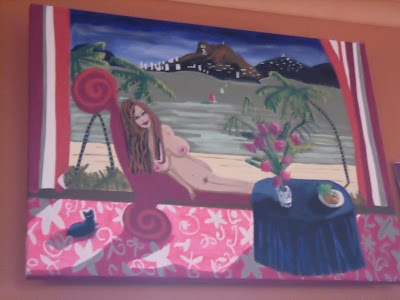 It’s basically another crack at the first one, but with a different color scheme, more prominently placed breasts, and a smaller and more deformed cat. And what if I showed you another in the series? 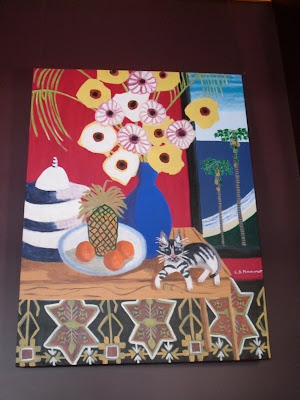 Mmm hmm. I rest my case.

What else does the Ville of Towns hold? Violently fun Mexican-themed restaurants with menus designed for drunks with ADD? Check! 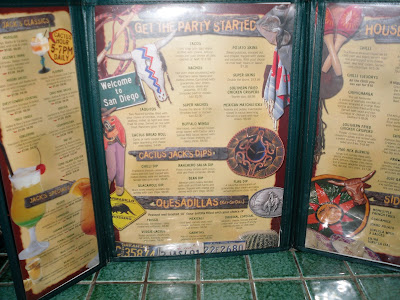 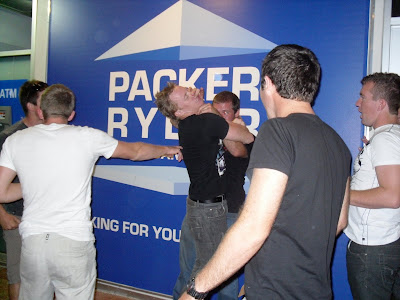 How about middle-aged men sitting on benches near Woolworths in full daylight who hold their dicks in their hands and pee directly onto the sidewalk, missing your foot by mere centimeters? Check, check and check!

While I was tempted to snap a photo of that last one for you, I thought better of it. Instead, what I did was have a very honest (if somewhat subdued) reaction while staring this gentleman dead in the face.

“What? Interesting?!” he spat back.

Reflecting upon my initial response, I decided that yes, this was indeed a situation of interest. With that in mind, I replied, “Yup.”

To which he, still urinating into the foot path, responded, “FUCK OFF!”

And that, my friends, is a day in the life of Townsville.