The day started with a drive from Melbourne to Rutherglen*, which looked a lot like this: 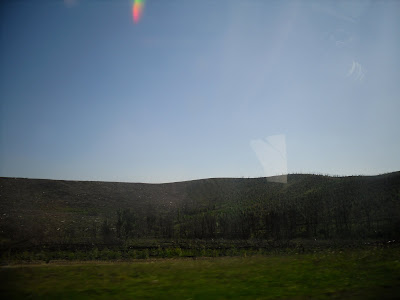 We stopped for lunch in historic Glenrowan, where Ned Kelly was captured. Let me explain the Ned Kelly legend for you non-Australians. Ned Kelly is an Australian folk hero who put a garbage pail on his head and took out some cops. 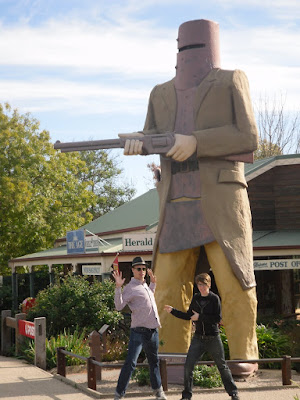 The story is slightly more complicated than that, but not much. Look into it sometime, if only for the colorful language employed in its telling. I found out, for example, that Kelly was “black-balled” by a Constable. That means that the Constable grabbed and squeezed Ned Kelly’s testicles in an effort to subdue him. If this sort of detail has made it into the history books, you can imagine what other strangely homoerotic confrontations may have been left out. You’ll also discover that Kelly racked up many charges in his criminal days, my favorite of which is “feloniously receiving a horse.” (“Sir, how did you come to receive this horse?” “Um…feloniously?” “You’re under arrest!”)

Basically, Ned Kelly is a great example of how bad-ass Australia is. It’s a country of convicts with a bona fide cop-killer hero! Gansta rappers are complete babies by comparison. Yeah, Ice-T, I’m looking at you. You’re named after a beverage, for Christ’s sake, a beverage made from leaves.

Soon after lunch, we arrived in Rutherglen. Now, look. I don’t want to use this blog to brag about how awesome my life is. I won’t tell you that we’re staying in a boutique hotel on a winery, with in-room spas, or that my room happens to be decorated in a colorful Moroccan style. I won’t tell you that the town of Rutherglen is freaking adorable, especially when bathed in late afternoon sunlight, or that it’s filled with 100-year-old architecture housing quaint little cafes and bookshops and people who love wine. Instead, I’ll show you this sign on the way into town: 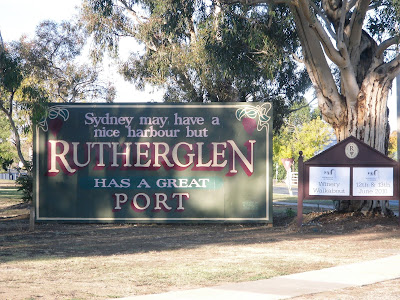 And this poster, pinned up in the “green room” of the RSL where we performed: 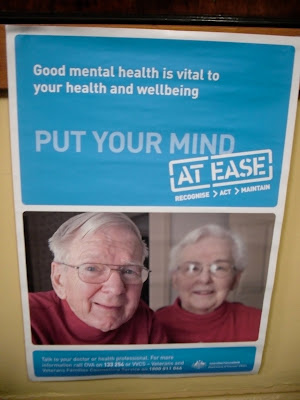 As far as I can tell, it’s some kind of advertisement for mental health in the elderly. Let’s be realistic here, though. Could anyone fault the ol’ guy for a spot of confusion upon realizing that he and his female companion had morphed into the exact same human being? (“I don’t have dementia, god damn it! That’s me over there! That woman in the red turtleneck is ME!”)

I would also like to point out that Rutherglen is a town of about 2,500 and we performed in a sold-out theatre of 350. That’s 14% of the entire town, if you’re awesome at math, which I am. And those 14% were, on average, gray-haired and surprisingly game. (“Tell it to my balls!” I shouted, while indicating my groin area, and oh, how they laughed and laughed, wiping tears from under their bifocaled spectacles.)

After the show, and after much moral indecision, I decided to jump in the spa. Yeah, I know it took a long time to fill up, and I know Australia is a country under water restrictions. But I eventually justified my decision as fodder for decadent tales for the grandkids, after most of earth’s fresh water has been depleted.

“I used to just SIT in it, kids! I wasn’t even dirty! I would just fill up a big tub, plunk down into it, and let the bubbles tickle my skin! What’s that, Xenic? No, I didn’t drink it, or use it to wash off the nuclear dust. I just sat in it, alone, like a queen! Ah, those were the days. Now, pass me that eyedropper. Grandma needs her government-regulated, daily water dose. Mmm, almost moist.”

*While writing about the town in text messages, I found it easiest to input the town’s name in blocks, as “rut her glen,” and then eliminate the spaces. Now, despite the fact that really nothing in this town is raunchy in the slightest, I can’t help but think of it in that way.

Day Eight, Melbourne: None of Your Beeswax