Guys! Welcome back to the blog.

Yes, I know it’s been a, um, year since I’ve last written here. But let me just say, in my defense, that I’ve never claimed to be consistent. Also, in my defence, I don’t even spell common English words consistently, when two versions of those words exist and are both equally acceptable. In fact, in the past, I’ve been described by friends as “consistently inconsistent.” And I think that description really fits, except for when I don’t.

What I’m trying to say, is here we are. I’m back on the Melbourne International Comedy Festival Road Show and I want to share my experiences with you, via this blog. I also want to share my experiences with you via interpretive dance, intricate papier-mâché masks and West African Polyrhythms, but some things will have to wait. (Papier-mâché takes a long time to dry and I’m not even sure what West African Polyrhythms are. Plus, I’d need to enroll in some kind of modern dance class. It might be years before I get that all together.)

I’ve been wondering how best to organize these entries, because I’m already quite behind on the day-by-day method. Then I realized: I’ll just do the gosh darn best I can and you guys can be grateful for what you get. Deal? Besides, it makes sense that I’m a little discombobulated. In the span of less than two days, I went from this: 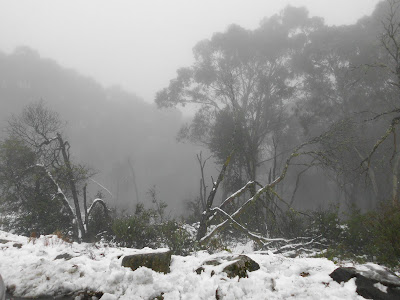 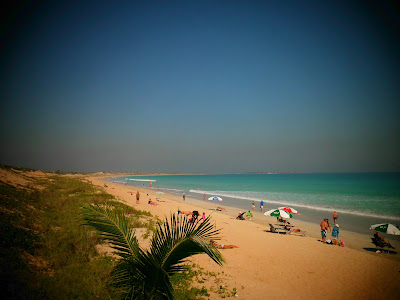 In less than five days, I made these stops around the continent of Australia: 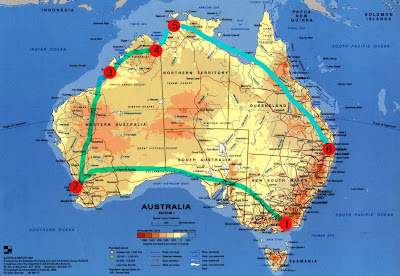 I started in Sale, Victoria, and I’m now in Noosa, Queensland. Now, please don’t think that I’m complaining, because I’m not. I’m not the type of person to find travel stressful. I actually find it thrilling to wake up in a strange room and for a good few minutes have no idea what time it is, what day it is, or where on the planet I am currently located. Yeah! That’s life, man! Livin’ to the fullest! I like waking up full of questions such as Who am I? What year is it? What’s this sticky stuff on my knee? Life’s a mystery, dudes. Embrace it.

I will admit, though, that things almost got stressful when our flight was delayed in Darwin. But in addition to being placated with $30 vouchers for airport eats, we managed to sweet-talk our way into the Qantas Club Lounge, narrowly avoiding what would have been the unbearable torture of having to wait for an extra hour and forty minutes in the airport. (Read: among the common people.) No. We settled into the lounge, where we as inconvenienced Silver Frequent Flyers rightfully belonged, nestled in sweet free buffet luxury with our well-heeled peers and colleagues, tip-tapping on our internet-connected laptops, sipping cocktails and picking at extravagant meat and cheese platters. 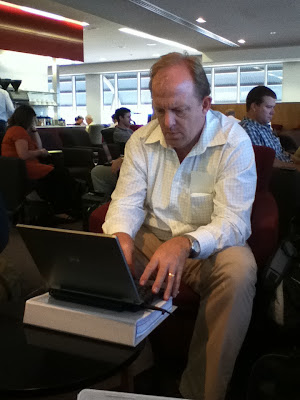 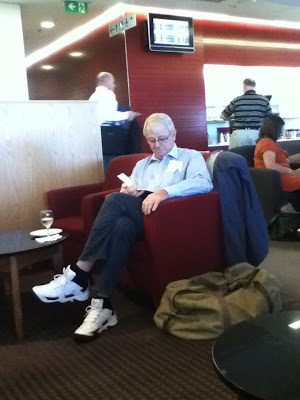 After nibbling on the many delicious gourmet offerings available to me in the Qantas Club Lounge (read: two watermelon slices and a gluten-free cookie), I still had a $30 voucher to spend at the airport restaurants, which consisted of Red Rooster and a “cafe” called something like Awakenings or Whispers or Kozy Momentz. I didn’t really see what it was called, because the name was written in Papyrus font, which I refuse to acknowledge on a purely aesthetic basis. (This is also my policy on Gary Busey’s teeth and the state of Pennsylvania*.) After buying a fruit cup ($7.90 and chock full of useless cantaloupe, the Pennsylvania of the fruit world) and a juice ($3.90), I still had $18.20 to spend. What did I do with this money, my friends? I did the only thing I felt I could do. I bought three slices of $5 banana bread.

It doesn’t matter that thanks to both self-imposed and intestine-imposed dietary restrictions, I couldn’t eat that banana bread. That’s not what it was about. It was about the personal challenge of seeing if, in the seven minutes before I had to board my flight, I could offload that banana bread on strangers.** Let me tell you, it’s not as easy as it may seem to offer haphazardly-plastic-wrapped foodstuffs to total strangers in an airport.

Let me rephrase that. It’s actually really easy to offer haphazardly-plastic-wrapped foodstuffs to total strangers in an airport, but what’s not as easy is getting them to accept those foodstuffs and then put those foodstuffs in their mouth and chew them and swallow them and ultimately allow those foodstuffs to become part of their body’s cellular makeup. (Whoa. I don’t think I realized how intimate the whole exchange was until right now.) But I did it! I got rid of all the banana bread, and with time to spare. I think I owe my success to the fact that I am nice and I look friendly, and banana bread is freaking delicious. To all the cynical people that rejected my no-strings-attached offer of banana bread, I hope that one day you will be able to open your hearts and allow the universe’s eternal abundance of blessings to flow into and enrich your life. To the business man, woman at the news stand, and young mother that did accept my banana bread, I hope it was tasty and didn’t give you gas. But if it did, you can blame the people at Tempting Treets (or whatever that cafe was called). I didn’t make it. It’s not my fault. Jesus, I was just trying to do something nice!

So guys, this about wraps it up for this blog post. I’m going to keep ’em coming (and do my best to catch up on the places I’ve already been), so stay tuned.

*My issues with the state of Pennsylvania are too complex and numerous to get into here. But trust me. Pennsylvania knows what it’s done.

**The other option was bringing the banana bread onto the plane with me. Every fifteen minutes or so, I’d take out a piece, have one bite, and then set it aside. When the flight attendant came to collect garbage at the the end of the flight, I’d pile all my nearly-whole slices of bread into the bin. This plan was scrapped for two reasons. One, I really needed more than three pieces of bread to make it funny. Two, the idea was to confuse the people sitting near me, and all the people sitting near me were fellow comics. They’d either think nothing of it, and/or ask to finish my bread.