MICF Road Show 2011: Warburton- Where Even the Casual Racism is Quaint

For the record, readers, I’m in Cairns at the moment. Cairns is awesome. I’m sure blog-worthy adventures will unfold here, but in the meantime, I’m going to do my darnedest to catch up on writing about towns I’ve already been to. And to declare, officially, that I know exactly what my last thoughts will be and what I will feel like should I die in a plane crash.

In the middle of a genuinely scary, shaky landing the other day, I didn’t find myself thinking, “Holy shit, I’m going to die!” or “Why me, God? I have so much to live for!” or “I hope my friends and family know how much I love them.” No. The actual thought in my mind was, “Oh, really, Qantas? You’re going to KILL ME now? First you lose my buddy’s luggage for the second time in two weeks, THEN our flight was delayed, and now THIS? You’re actually going to kill me? This is subpar service, Qantas. Subpar!” Now I know this about myself. If I go down in a plane crash, I will die annoyed with the service.

Let’s all hope I don’t die in a plane crash. I don’t think that level of self-righteous, white, middle-class consumer annoyance would be good for my soul as it passed into eternal rest. But enough of that. Back onto the road show!

I almost don’t even want to tell you what a wonderfully enchanted little hamlet Warburton, Victoria is because I’m afraid when word gets out, its adorable cafes and quaint river picnic areas will be overrun with scarf-wearing, espresso-drinking, Palahniuk-quoting tourists from Melbourne*. I had a feeling I was going to like the town when I checked into my hotel room to find not only this hallway of beds 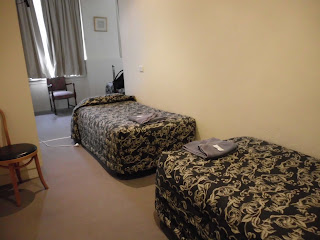 but also, around the corner, a full double bed. 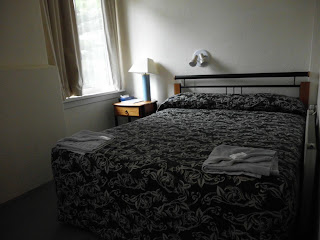 If there’s one thing I like in a hotel, it’s the ability to provide me with three times the sleeping options I actually need. It’s not often I get to feel like, “Man, if I just had two kids, I could get my money’s worth out of this place!”

Warburton had me at triple beds. And then, there was this view from the hotel 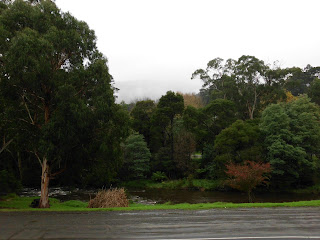 which I’m sure the kids would have loved, had they existed and been able to be there.

I walked downtown (which I really should put in quotation marks) and despite feeling good about the place, I didn’t expect to find much I could eat. I mean, rural Victoria is not generally a bastion of gluten-free and vegan dining. In fact, in many places in rural Victoria, chicken is listed as a vegetarian option. If you order it, the waitress laughs in your face, spills beef blood on you, and calls you a “poof”**.

Almost immediately, though, I found this sweet little cafe 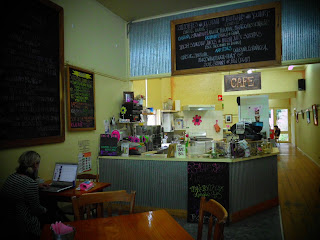 It doesn’t matter if this cafe has anything for me, I thought. I’ll just hang out. I’ve already struck gold finding such a delicious, healthy soup. That will keep me going for days, as I sift through the culinary wasteland of chips and garden salads available at town pubs. That soup really hit the spot. It was perfect. It’s all I need. Just me and ol’ soupie, friends for life as he sloshes around in my stomac–

The answers are yes and yes! Here’s a picture of that heavenly pie. (I only thought to add sauce after I took a quick and greedy forkful. I need you to know that before I hoed into it, the pie was a pristine work of art.) 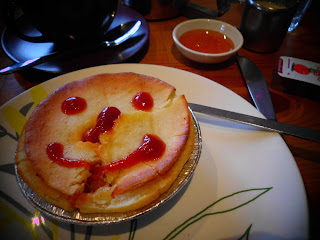 The strange thing is, I didn’t even make a smiley face with the sauce. That’s just how happy the pie was to see me, its ideal devourer.

How amazing to find two gluten-free-friendly places in one tiny town! I thought. Wow! What a boon! What luck! I mean, there’s no way I could– 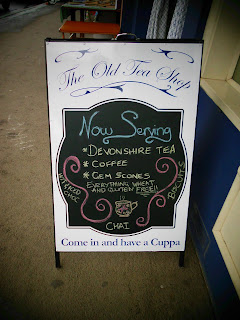 I’m sorry, what? Scones and treats and they’re all gluten free? Well, slap a kangaroo on the cheek and call me Sheila! Stab a koala with a spork and sing waltzing Matilda! Kick a crocodile in the snout and spin Olivia Newton-John in a circle! (These are traditional Australian expressions of disbelief.)***

Just when I thought Warburton couldn’t get any more full of love and light and amazement, I ducked into a little spiritual shop. (You know, the kind of place that smells like burning grass, sells crystals, and has far too many owl figurines.) What should I see there, but this beautiful candle, made up of hundreds of smaller candles. 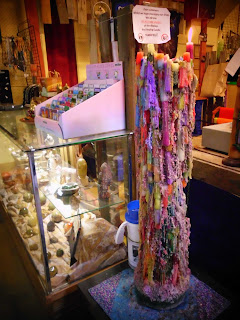 It was so lovely, I thought I’d check it out from another angle 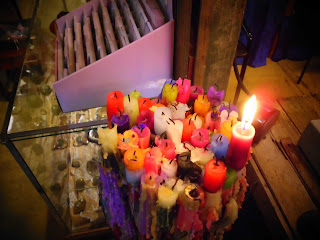 when the woman at the counter said, “What does that sign say?” 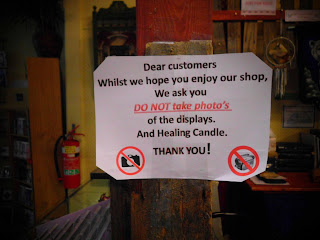 It may have been my bristling at the passive-aggressive way in which she indicated to me that I shouldn’t be taking pictures of the candle, or it may have been my innate impudence which prompted me to then take pictures not only of the “No photo’s” (cringe) sign, but of the woman herself 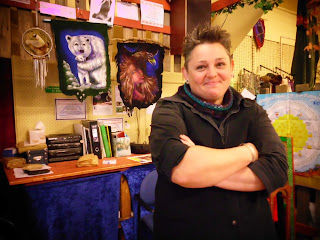 who was actually quite pleasant. Oh, Warburton, I thought. What a dream world! So many gluten free options, so many choices of hotel bed, and even your restrictive signs aren’t meant to be taken seriously. I really think this is a town I could li–

“You’re alright,” the woman at the counter said. “It’s just the Asians. They drive me crazy.”

*For the record, I like scarves and espresso and Palahniuk. I also like running perfectly innocuous things together until they sound like insults. Then again, I’m just a wet-haired, pajama-wearing, blog-writing, cookie-eating, music-listening, hangnail-having comedian.

**This is a blatant lie but it creates the mood I’m going for, so I think it is acceptable. (See also: romantic candlelight.)