Greetings from Gladstone, Queensland! Let me tell you a little about the place.

Now, I won’t say that Gladstone is depressing. But I will show you this view from my hotel room. 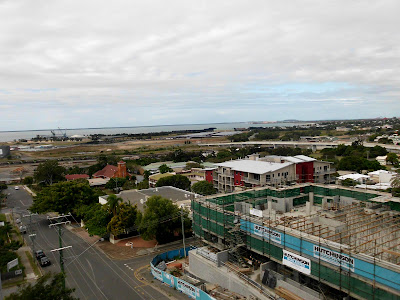 That’s not depressing. Look at the ocean! The sky! The construction! Clearly there’s industry here. There’s movement. There’s growth. Growth that wakes you up at 7:30 a.m. on your day off.

Those of you with, like, jobs and stuff might be thinking that waking up at 7:30 a.m. is no big deal. And you’re right. It is no big deal. Waking up at 7:30 a.m. is totally normal…IF YOU WORK IN A BAKERY. Since I am not a baker and I have no reason to be up at the crack of dawn makin’ scones, 7:30 a.m. is like the left side of Mariah Carey’s face to me. Which is to say, it’s not something I often see* except on the other side. Don’t get me wrong. I have nothing against 7:30 a.m. as a time, but I’d much rather stay up until it then wake up at it. [Here’s where I might make another allusion to Mariah Carey’s face except that the simile is kind of forced and confusing at this point.]

It’s possible I arrived in Gladstone a bit cranky. But Gladstone needs to shoulder some of the responsibility here. Gladstone, are you listening? There is NO REASON for you to shut down your entire town just because it’s Sunday. People still like to go to cafes on Sunday. And if all the cafes and restaurants are closed, people might like to shop for groceries. Yeah, shop for groceries. Now, I don’t want to blow into your town with my hoity-toity, big city attitude but you might want to consider opening your Woolworth’s on Sunday. It’s just sitting there, stuffed with food, doing nothing but teasing me. Can you tell me, Gladstone, where or what a weary, sleep-deprived traveler is supposed to eat on Sunday? And don’t tell me to go to Rocks@lt, the only restaurant that’s open. I refuse to acknowledge an establishment with a @ in its name.

It was starving, annoyed, and with a heavy heart that I went out to explore Gladstone. “What a crap festival,” I thought to myself. (Yes, “crap festival” is a phrase I think to myself.) I perked up when I passed the library, though I knew there was no way it’d be open. Why would it be? It’s not known as the Libr@ry, after all.

But with the tiniest shred of hope in my heart, I walked over to the door anyway. You can imagine my shock and surprise when it opened. If you’re a total nerd with a thing for libraries,** perhaps you can even imagine my thrill at the opportunity to explore a new and quiet book-filled heaven of delicious dreams. You can not, however, even begin to come close to approximately almost imagining the utter euphoria that spread through me when I saw this: 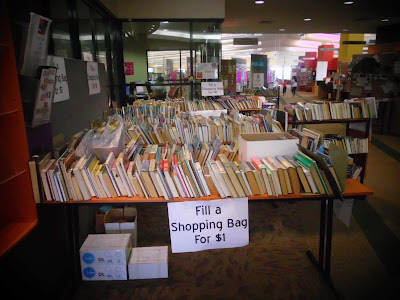 It’s not just a library book sale (my favorite kind). It’s a fill-a-shopping-bag-for-$1 library book sale! It’s complete madness! And it was enough to make me forgive Gladstone for everything. Maybe it was my new attitude toward the town of Gladstone that the woman at the counter detected when she let me have not one, but TWO shopping bags chock full of books for just one dollar. That’s twelve books for a dollar! It was all I could do not to kiss her on the mouth.

Delighted with my new books, I bounded down Goondoon street 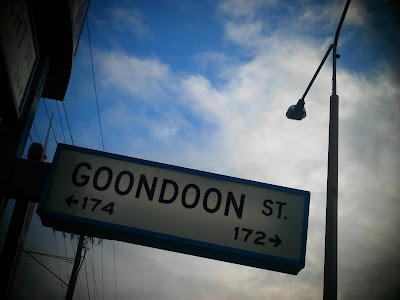 where I found this mural. 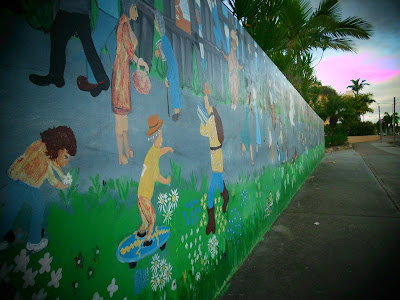 I thought the library book sale was a blessing, but this wall is filled with so many colorful depictions of life in Gladstone that I was transfixed.

First, there are the lesbians dancing, while another, more butch lesbian serenades them on the flute, reading sheet music from a stand magically hovering off the ground. 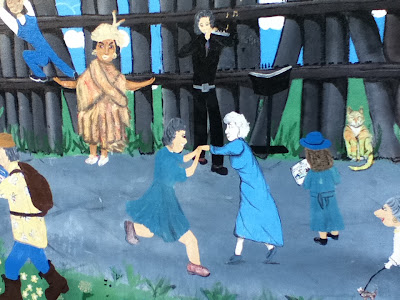 There’s the black woman to their left, staring directly at the viewer and holding her arms up as if to say, “Yeah, my mouth and earrings look exactly the same. So what? You wanna go? Come on!”

Then, there’s the single woman looking on with a mixture of encouragement and wistful envy as she takes her rat for a walk. 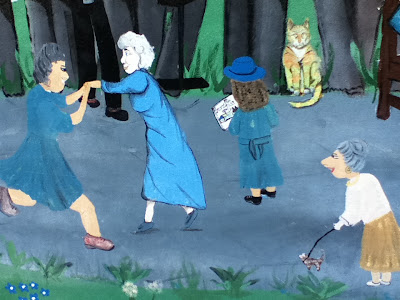 If you’re wondering what the giant cat in the background is staring at, it’s this wind-blown and surprised mime boy inexplicably kneeling over a girl who’s reading and trying to twist her legs onto the same spatial plane as the rest of her body. 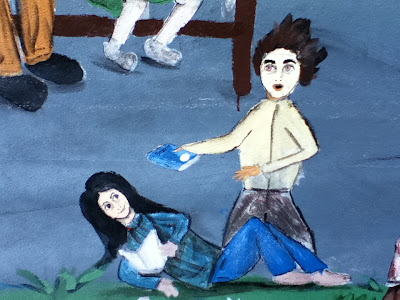 Behind them, there’s this couple on the bench. He seems to be asleep reading the newspaper, while she’s pleased to press a teeny tiny book against her skirt. 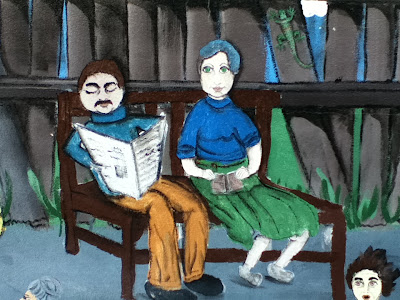 Just beyond them are the troubled newlyweds. The bride, somewhere between angry and vacant, storms off, while the groom silently pleads with her to stay, with what is the most genuinely expressive face of the entire mural. “I love you,” his eyes whisper. “I don’t mind if you have tiny feet that could probably never support your body weight. I can take gigantic strides for both of us, especially with my clown-esque right foot. Look at me, damn it! Look at me!” 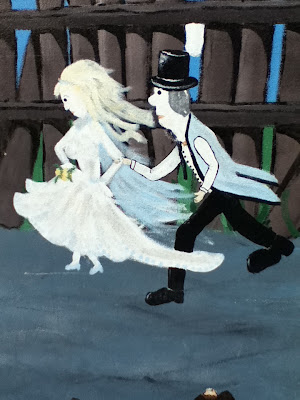 Maybe the bride isn’t cold-hearted. Maybe she’s just contemplating their future lives in Gladstone. After all, it’s not all dancing lesbians and random mimes. There are some undesirable characters around. 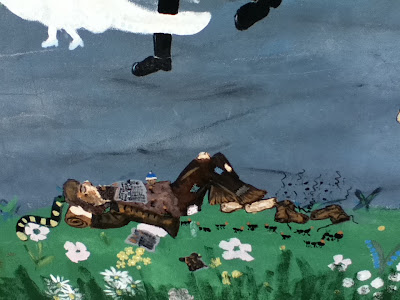 Luckily, the stinky hippie bum is out-numbered by these citizens: the terrified little boy step ladder, the blood-soaked blond woman, the huge unattended yet super intelligent literate baby, the gigantic man with a cut under his eye, and the eensy weensy little boy. 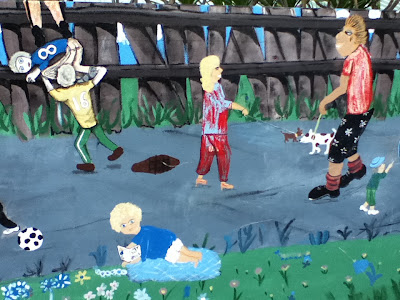 What is that mischievous little boy up to, anyway? Oh, he’s just lighting that astronaut’s shoulder rocket. 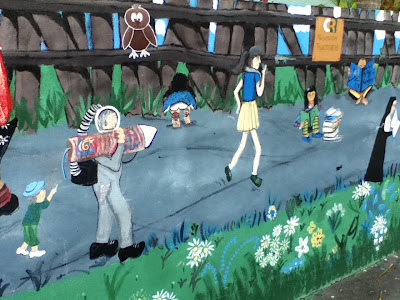 Which is directly aimed at an innocent and oblivious girl skipping past.

A girl who may or may not be sniffing glue with snake around her neck. 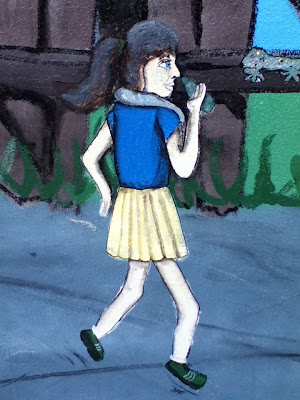 I’m sure whatever she’s doing with that bottle is more pleasant than hunching over, picking flowers under a giant cat butt. 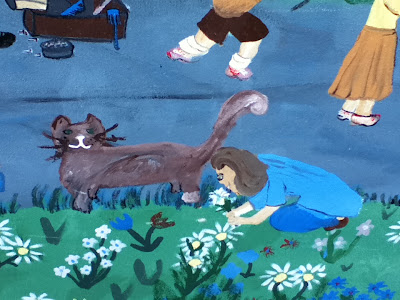 And it’s certainly better than being the only Aboriginal woman in the scene, relegated to looking in sadly from the other side of the fence, while a kid with a really well-developed left buttock and massive left arm tries to get over to reach her. 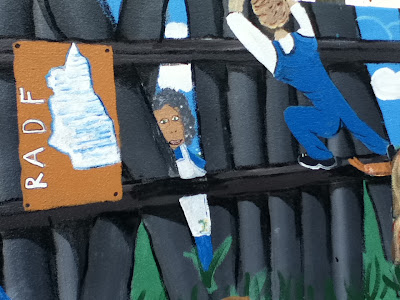 Gladstone, you really came through for me. Sure, everything except Rocks@lt is closed on Sunday and you look like a ghost town. But you have this dynamic mural, which really tells your story. And you have the library, the incredible library. And, Gladstone, you even have this portent, a glimpse of the person I would become if I stayed here any longer than 24 hours. A person resigned to a life of deathly quiet Sundays, staring bleakly into the future as I haul my library books back home. 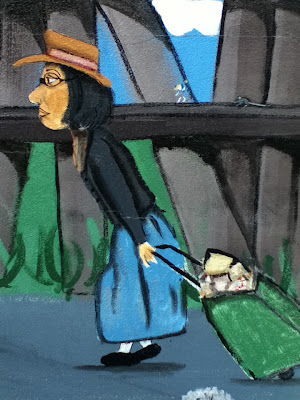 *Seriously. Check out photos of her. She’s always obscuring the left side of her face. What are you hiding, Mariah? WHAT ARE YOU HIDING?!

MICF Road Show 2011: Warburton- Where Even the Casual Racism is Quaint