Guys! Get ready to take a photographic tour of Surfer’s Paradise, Nimbin, and Ballina. We here at DeAnne Smith feel the self-imposed pressure to crank out the blog posts, so we’re triple-timing this one, in the hopes of eventually catching up on everywhere we’ve visited. We’re also referring to ourselves in the plural. It just makes us feel good.

We didn’t take too many photos of Surfer’s Paradise. Despite the name, Surfer’s Paradise doesn’t feel terribly paradise-like, unless your idea of paradise contains flashing neon lights, lots of offers for $9.99 cargo shorts, and quite a few novelty condom shops. (And hey, we’re not judging you if it does.)

This is what Surfer’s Paradise looks like from a hotel balcony. 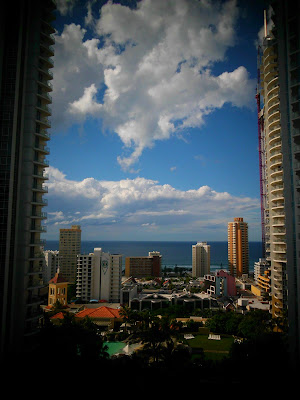 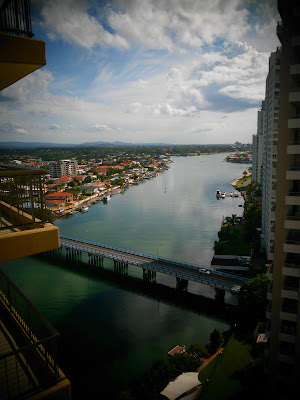 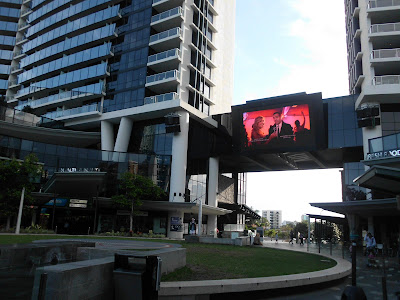 We might have been tempted to say that Surfer’s Paradise has no soul, if it weren’t for this
statue of a dog named Matey. Any city that: 1. names a dog Matey and 2. erects a statue to that dog is fine by us.

We can understand what made so many people flock to Surfer’s Paradise in the first place, with beaches like this. 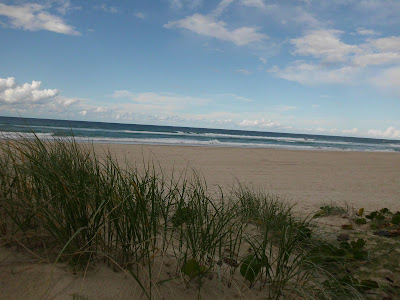 (We won’t tell you about all the concrete we had to carefully crop out of the photo to get that pristine-looking shot because that might spoil its beauty.)

Speaking of beauty, on our way out of Surfer’s Paradise and on to Ballina, we decided to stop by Nimbin. Nimbin, if you don’t already know, is Australia’s renowned hippie enclave, sister city to Woodstock. It’s located in what’s known as the “Rainbow Region.” Just as we were leaving Surfer’s, what should appear? 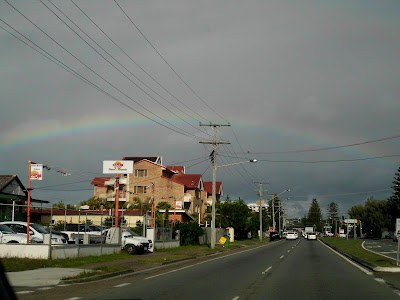 That’s right, a rainbow, also known as God’s signal that he approves of gays.

But nothing could have prepared us for the site of Nimbin, a small strip of almost impossibly bright and colorful shops nestled in the mountains. Let us tell you, Nimbin takes that “Rainbow Region” stuff pretty seriously.

We’d heard that a lot of pot-smokin’ goes down in the ‘bin (Okay, we never heard anyone refer to it as “the ‘bin.”) but we didn’t expect to be offered pot LESS THAN FIVE SECONDS after we shut the car door. We also didn’t expect to be offered pot so regularly and consistently throughout our stroll of the town that we finally just had to avoid eye contact with every single person on the street. Which actually wasn’t too difficult, considering the street looks like this. 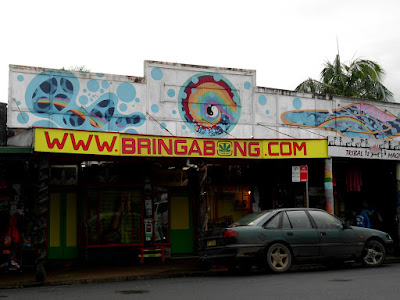 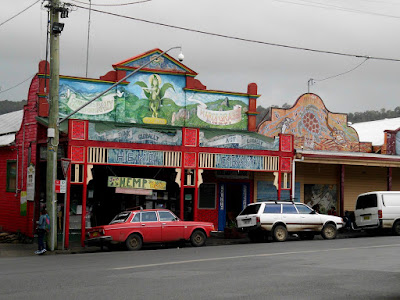 Even if you don’t choose to partake in the ‘bin’s main export, Nimbin itself will mellow you out and trip out your eyes. There are signs and symbols everywhere. Signs like 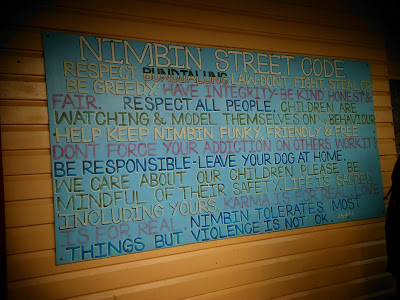 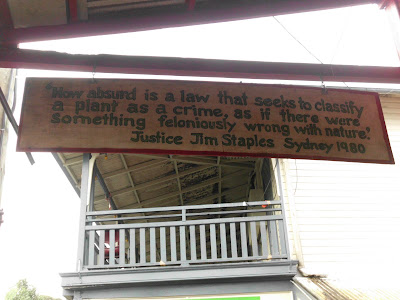 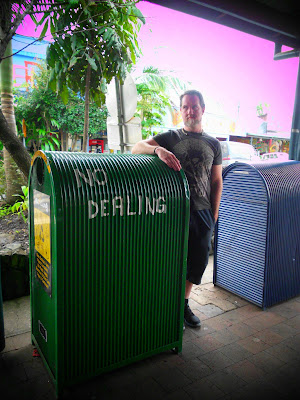 FYI: That is comedian Dave Callan, not a Nimbin resident. Dave did blend in pretty well with the Nimbinians though, considering at least 57% of their male inhabitants look like wizards.

The Nimbin people are an interesting bunch. If I had less regard for my own personal safety, I would have snapped more photos of them for you. (Sorry. We can’t keep up with referring to ourselves in the plural anymore. It’s driving us crazy.) I did manage to get this one, though. 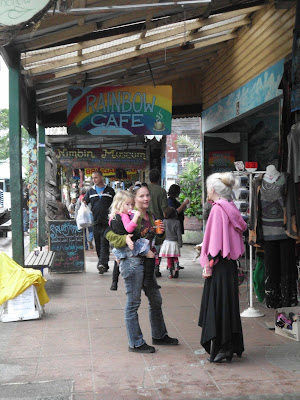 Look closely and you will also see Rainbow Cafe and the Nimbin Musuem, which we’ll get to in a minute. First, the Nimbin store sign that says it all: 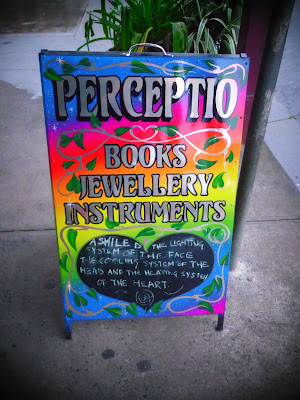 I’m convinced the store is really named “Perception” and they either ran out of room for the N and thought “Whatever. We’re not slaves to the alphabet in this town. Fuck the man!” or it was a mistake that no one has noticed to this day.

“Dude, here’s that new sign you ordered for your store, Perception.”
“Thanks, man. It’s awesome. The rainbow background is just so…well…like, it’s rainbowy, you know what I mean? All the different colors. That’s great, man.”
“Yeah.”
“And the heart. Is that chalk? That is sweet, man! I’ll put quotes and stuff in there. You know, like consciousness-raising kind of shit. Quotes and stuff. In the heart. That’s so symbolic, man.”
“Yeah.”
“And the ivy. Is that, like, silver vine? You’re a genius, man! ‘Cause that’s exactly how it is! Like, you know, plants, man, they’re just light. They’re just light. Because everything comes from the sun, you know what I mean? And the plants take in the sun and so, like, they’re really just made of light. That’s what plants are. That’s what they do. No. No! That’s what they BE. They’re so awesome, man. Holy shit. Oh my god. And we eat plants and we’re made of plants so really, like, we’re made of light. We’re made of light! Essentially, man, if you think about it, if plants eat sunlight and we eat plants, we eat the sun. Are you following me, man? That’s happening. That’s what’s happening. We’re doing that every day. It’s beautiful, man. Hold on. Wait. I just thought of some new lyrics for my band. I’m gonna write this down. No. I’m gonna paint this on a wall. Yeah. I’m gonna paint this on a wall. Do you have any paint, man?”
“…”
“Any paint, man?”
“…”
“…”
“…”
“…”
“Did you say something?”

The “museum” is where you’ll find most of these words of wisdom. According to the museum’s website, the museum “is an effort to communicate the history of Nimbin through the eyes of a hippie.” That’s an accurate description, if you replace “communicate the history of Nimbin” with “jam as much junk as possible into every square inch of eight dank rooms” and replace “hippie” with “manic, disconnected, borderline schizophrenic drug-addled brain.”

The museum is truly a site to see, and I’m afraid that photos alone don’t do it justice. Winding your way along the rainbow serpent path you’ll come across stuff like this, which assaults your eyes with so much incongruous visual information that it’s nearly impossible to remember where you are or what you’re supposed to be doing, let alone focus on what’s in front of you. 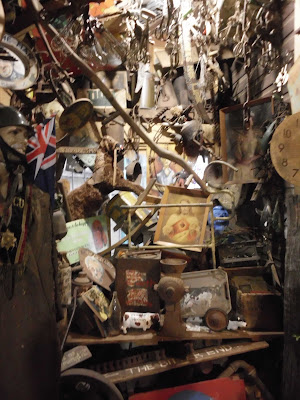 Is that solider? A British flag? A framed picture of Jesus? What’s that stuffed horse doing there? Why is there a plate with a picture of Einstein on it? Why does the plate say “Sponge Finger Addict?” What does “Sponge Finger Addict” even mean? Where am I? Why is any of this happening? What’s written on the side of that tiny cow? 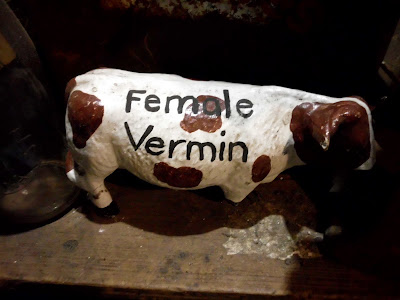 Oh. But before you can either 1. be disturbed by the implications of “Female Vermin” written on the side of a tiny cow or 2. question what it has to do with the history of Nimbin, just look up and to your right. 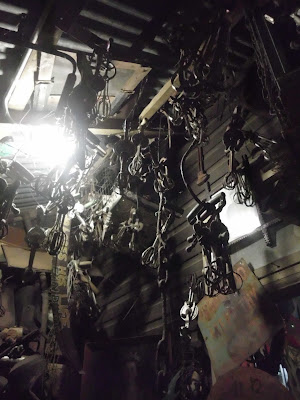 A collection of suspended kitchen implements! And then the words of wisdom begin. 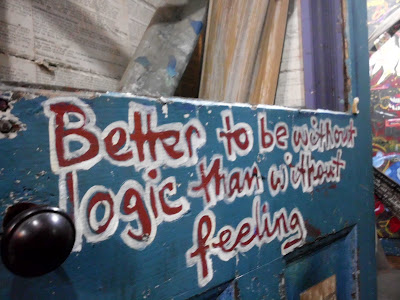 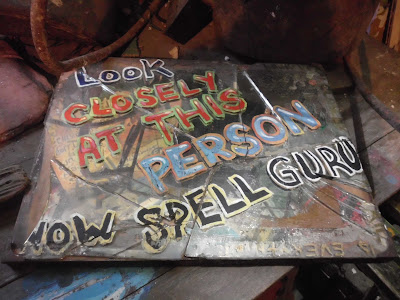 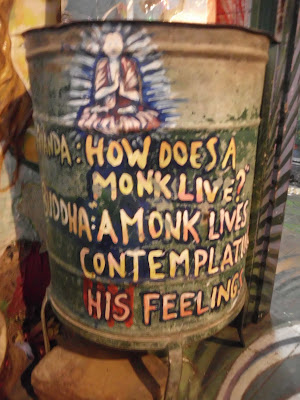 What? A monk lives contemplating his feelings?! If that’s true, Nimbin, I’ve been a monk my whole life! And all of my girlfriends have been monks, too. In fact, most lesbians I know are monks. All we do is contemplate our feelings. This is great news. 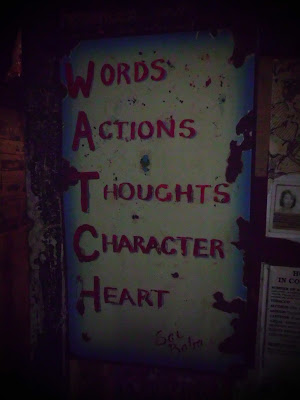 Perhaps the experience of Nimbin made me more perceptive, sensitive, and alert on my way into Ballina, where I was able to really appreciate not only Ballina’s cute puns
but also what seems like the most sympathetic and considerate tattoo shop in the world. 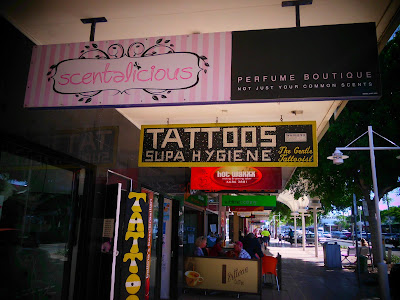 There’s Scentalicious Perfume Boutique (not just your common scents) and Tattoos Supa Hygiene, The Gentle Tattooist. I’m in love with the idea of a gentle tattooist. “I don’t use needles and ink to get under your skin. I’m the Gentle Tattooist! I use feelings and emotions to make my indelible mark.” Wait. According to that, most lesbians I know are gentle tattooists as well. 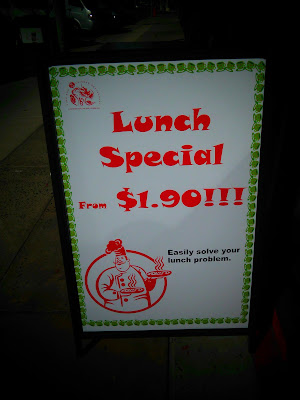 Phew! Knowing that any lunch problems that may arise can be easily solved makes it possible to relax and enjoy Ballina’s pleasant riverside sights. 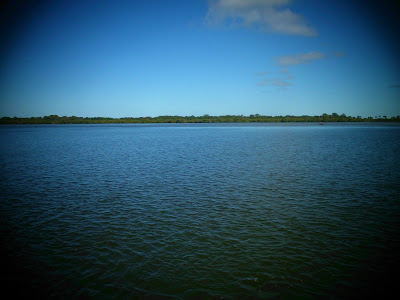 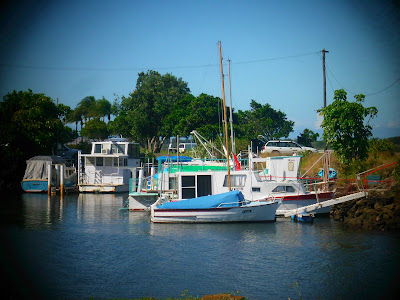 Ah, Ballina. You’re a cute little town. And I don’t want to seem ungrateful for all the unique beauty you have to offer, but if only you had a bit more of the Nimbin spirit in you… 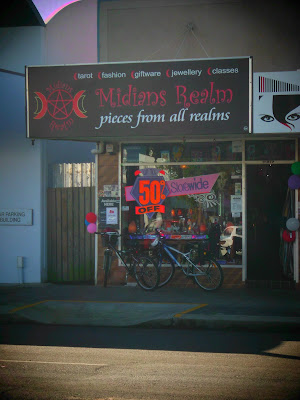 Does that say “Pieces from all realms?” All realms? Ballina, maybe you do have a bit of that Nimbin spirit after all.