Road Show has come to a close for me this year, and I’m nestled back in the chilly Southern Highlands of New South Wales. I really don’t know whether or not the enjoyment you mysterious readers in ether-space get out of these blog posts is proportionate to the level of near-crippling perfectionism and guilt I feel when creating them(1) but I am going to assume that this is worth it for someone out there. (Even if it’s only Future Me. Hello, Future Me! Remember when we went to these places? Also, can you play “Rocket Man” on ukulele yet? How’s the unicycle-riding coming along?)

I have about eight towns to catch us up on, and I will do so whimsically, with very little regard for geography or linear time. (Hmm, maybe my time in Nimbin affected me more than I thought it did.) I’ll start with Sale, Victoria.

Sale is a lovely little town that cares a lot about its local football team. Make that teams. Sale is home to not one but two Australian rules football teams: Sale and Sale City. Unfortunately, we didn’t get to see any of Sale’s football games, but we did drive to neighboring Maffra to catch the Maffra Eagles in action. 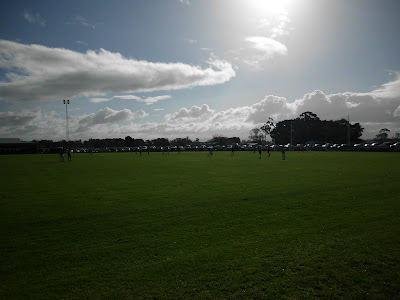 Yup, that’s the action. Don’t let the picture fool you, though. Country footy(2) is AMAZING. It’s got all the excitement of regular football, with none of the player scandals! You can barrack(3) for your favorite team completely free of the moral dilemma that ensues in professional football, where barracking for your favorite team is kind of ruined by knowing exactly how many rape and assault charges its players have been brought up on in the previous six months. Country footy is just good, ol’ fashioned fun.

As far as I can tell, the key elements of enjoying country footy include: driving your car up to the edge of the field, eating meat pies, yelling at young men in shorts, eavesdropping on the coach’s address, and running onto the field to kick the footy during half time. I’m happy to say I engaged in all but one of those activities. (Try to guess which one!) If it weren’t for vague undercurrents of homophobia, I’m pretty sure I could be quite happy living in the country and supporting my local footy team every week. Go Eagles! Look alive, boys! Keep up the hustle, number 17!(4)

Another wonderful thing about Sale was the effort the venue manager put into our back stage area. Not only did we have a GLUTEN-FREE snack tray…Wait, sorry. I can’t just move on from that. I need you to understand (Or remember. How’s it going, Future Me?) that snack trays aren’t just a thing that all venues provide. We’ll usually have some waters and soft drinks back stage, and we may see the occasional biscuits(5) or Cherry Ripe. A snack tray in itself is notable, and an all gluten-free snack tray is…is…I don’t even have the words. I won’t foist pictures of it upon you, but you can trust that much photograph evidence of this gluten-free snack tray exists and that I refer to the evidence in times of scarcity and need, so that I may hope and have faith in a better future.

In addition to the gluten-free snack tray, we found dinosaurs back stage! 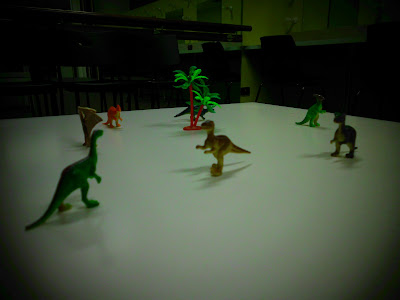 And for some reason, in our two nights at the Esso BHP Billiton Wellington Entertainment Centre, the dinosaurs invariably ended up in this position, 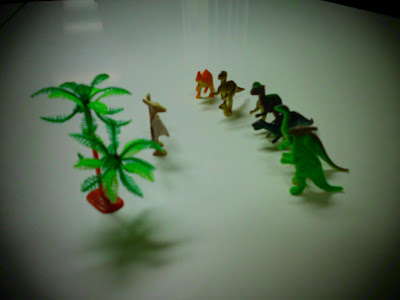 rapt as the pterodactyl preached on about how, one day, they would all end up as oil, gas and coal, making possible the very companies that sponsor the Esso BHP Billiton Wellington Entertainment Centre in which the dinosaurs were currently housed(6). Mind-blowing.

As fun as Sale was, I couldn’t stop thinking about Warburton. You may already know Warburton(7) as the gluten-free cafe haven I wrote about earlier. 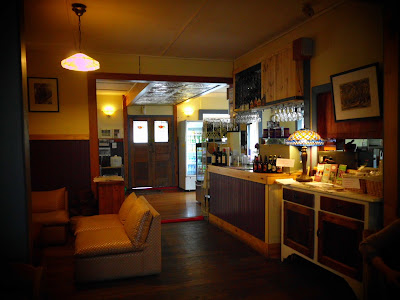 On our second day in Warburton, after chowing down on yet another beautiful vegan, gluten-free breakfast at Good Food, we decided to take a little stroll. 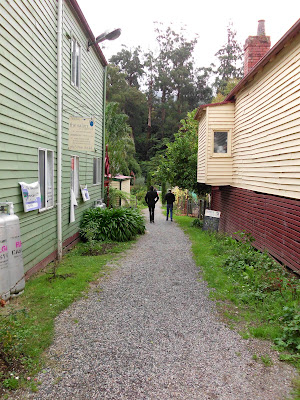 Just when I thought Warburton couldn’t get any more adorable 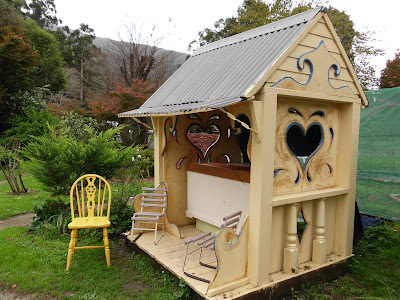 we stumbled upon this tiny house. Then, we found this gorgeously picturesque river 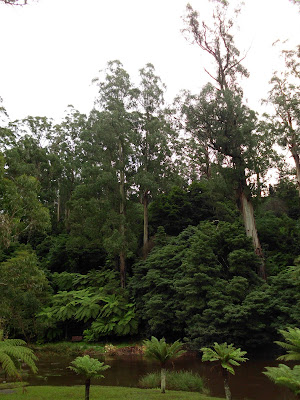 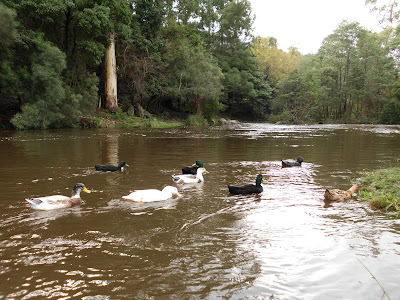 “Well, that’s gotta be it,” I thought. “There’s NO WAY this town could get any more quaint.” 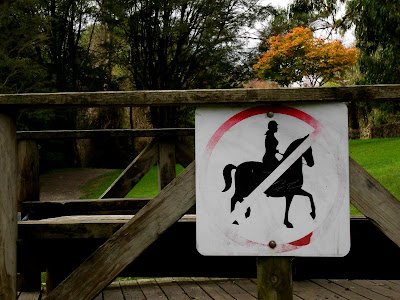 Oh, except for that “Please don’t ride your horses here” sign. Oh, and these signs, posted on the antique shop door. 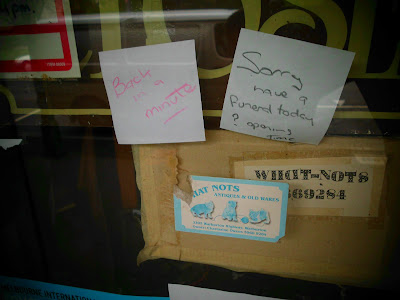 If you can’t quite see the post-its, they say “Back in a minute” and “Sorry have a funeral today. ? opening time.” I could quite easily write an entire novel based on these notes, but I’ll leave you with just a few thoughts. I love a shopkeeper that is comfortable enough to disclose the potentially very personal reason why they are out of the shop, and who is also optimistic enough to think that the funeral will only take a minute. I want to meet that shopkeeper. I want to buy his or her wares. The notes broke my heart and made me smile, a feeling I usually only get when I watch sleeping kittens fall off the things they’re sleeping on.

I didn’t want to leave Warburton. It had everything for me. Gluten-free food, tiny river houses, eccentric shopkeepers, ducks. This is how I felt before we got into the car, 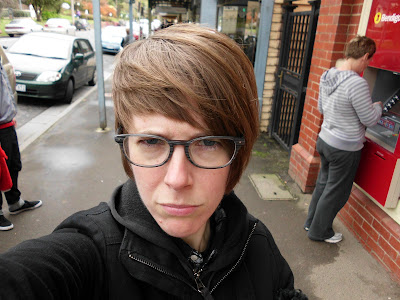 (1)Anyone know a good therapist?

(3)This is how Australians say “root for.” “Root” means to have sex. Needless to say, Australians get a huge kick out of Roots Canada.

(4)All things I actually yelled.

(5)AKA Cookies. I need to get back tah North America befoe I completely moph inta an Ozzie, mate.

(6) According to Earthsky.com, “The popular idea that oil, gas, and coal are made of dead dinosaurs is mistaken. Fossil fuels consist mainly of dead plants – coal from trees, and natural gas and oil from algae, a kind of water plant. Your car engine doesn’t burn dead dinosaurs – it burns dead algae.

Oil, gas, and coal deposits are really remnants of ancient muddy swamps. Dead plants accumulate, and, over time, pressure turns the mud and dead plants into rock. Geologists call the once-living matter in the rock kerogen. Earth’s internal heat cooks the kerogen. The hotter it gets, the faster it becomes oil, gas, or coal. If the heat continues for long enough after oil forms, all the oil might become gas. The oil and gas then creeps through cracks in the rocks. Much is lost. We find oil and gas today because some happened to become trapped in porous, sponge-like rock layers capped by non-porous rocks. Fossil fuel experts call this arrangement a reservoir.”

(7) It’s a little bit casually racist, which I’m choosing to ignore for the purposes of this post.

(8) Most of my ways involve stereotyping people based on how they are dressed. Also, eye contact.

THE Yukon: Pine Trees and Snow