THE Yukon: Pine Trees and Snow

Hi guys! First off, I’m going to resist the urge to remark on the fact that the last time I blogged was in June. And I’m not going to admonish myself, privately or publicly, for being neglectful and lazy and procrastinate-y and not tall enough and lacking in global political knowledge and generally somehow bad. Okay? I will not do that. The fact is, it’s here and now and I’m this tall and I know what I know about Yemen and this is the blog post that is happening.

And it is happening because I AM IN THE YUKON. That’s right. The Yukon(1) .

How did I get here? you and I might be wondering right now. I’m not really sure. At this point, it’s a haze of all-day multiple plane rides and a whimsical email I received in August, which went like this:

I found out your name by google searching for “vajimjam”. I got 1 result.

What are you doing in November? Want to come to the Yukon?

I totally want to come to the Yukon in November. How serious is this offer? 😉

So now I’m here in Whitehorse, half expecting to run into this guy. 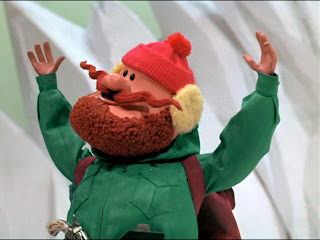 Yukon Cornelius! Until today, that pick-licking cartoon character encompassed the extent of my knowledge of the Yukon. I knew it was filled with gold, the fog was thick as peanut butter, and one had to watch out for Bumbles (2) . That was about it.

I’ve only been here for a few hours, so I don’t know much more yet. But I do know that I’m pretty into Whitehorse. It’s homey. I mean, look at this scene I discovered when I went in for an interview with the CBC. 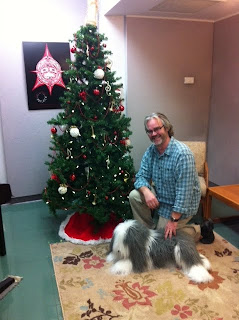 Okay, the Christmas tree I discovered; Dave and the dog I posed. But still! They were up for it. And nothing says “home” to me like a seasonal tree and a person who is willing to do what I say (3).

After the interview, I checked out a few shops on Main Street, scored some winter boots (Hey, icy winter clime: SUCK IT), and went for dinner at Ruby’s, one of the most charming (and delicious) vegetarian restaurants I’ve ever been to. At the risk of rambling on, I’ll let you read for yourself how cool Ruby is here. (Seriously, read that. How cool is she?!)

Ruby and her husband Pierre hooked me up with this plate of deliciousness: 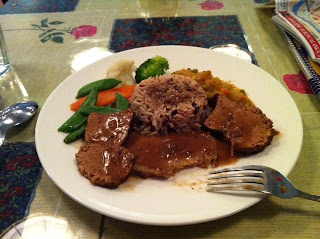 I just realized that to you non-vegetarians, that mostly monochromatic plate of mush might not look terribly appealing. But to vegan, gluten-free, traveling-all-day, up-since-4 a.m., 2-hours-of-sleep ME, it looked and tasted and smelled and felt like actual heaven. I couldn’t eat it all (having stopped off at Burnt Toast Cafe for truffle oil fries when Ruby’s wasn’t open, something that Ruby herself gently admonished me for) so I asked for some to take away.

“How big are your coat pockets?” Ruby asked.

“Not nearly big enough to contain my love for you,” I said. Okay, I didn’t really say that, but I wanted to.

I am currently finishing up that meal in my hotel room using plastic coffee stirrers as makeshift chopsticks. And you know what? As I bite roasted tofu off a stirrer, gravy on my lip, I don’t feel like a pathetic traveling comedian with a delicate digestive system, lonely and alone and lonely in a remote hotel room in the middle of a cold, desolate, and unforgiving landscape a stone’s throw away from actual Russia. I do not. I feel like a king.

So, thank you, Ruby. Thank you, Whitehorse.

And though it’s only 8:30 p.m. now, I’m getting ready to hit the hay, which I’m pretty excited(4) about. I’ll leave you guys here. Tomorrow: dog sledding!

(1)There seems to be much debate about whether it is most properly referred to as “Yukon” or “The Yukon.” Some think that calling it “The Yukon” is marginalizing, because one would not say “The Ontario” or “The Quebec.” Others think that because it is a territory (i.e. The Yukon Territory), using the definite article is not only acceptable, it is preferable. I’ve decided to pitch my proverbial tent firmly in the “The Yukon” camp. Why? I just like how it sounds. And while normally I would be inclined to ask around and see how most of the Sourdoughs– those are people who have spent at least one full turn of seasons in The Yukon– refer to the area, I will not. Because I feel that making a strong decision based on nothing but a gut reaction and then sticking to that decision, naysayers be damned, is exactly the sort of single-minded and hard-knuckled spirit that forged this great land. Long live The Yukon!

(2)Um, I’m pretty into the Rudolph the Red-nosed Reindeer Christmas special. And no, not just because I bear an uncanny resemblance to Hermey.

(3)Yes, I realize this could be unhealthy.

(4)Excited for real. This is about seven hours earlier than my usual bedtime. This means, I can sleep a ton and still wake up at 7 a.m. or something! I’ll be like a whole other person! A Yukon person! I’ll go out for early morning coffee and vegan/gluten free treats (I spotted a bakery today; this town has thought of everything), and I’ll write in a cafe and figure out what jokes I’ll do in my show and walk around and feel like a productive member of human society. Do you know when the last time I voluntarily saw 7 a.m. was? Um, NEVER.

DeAnne Smith in Charlottetown on te%